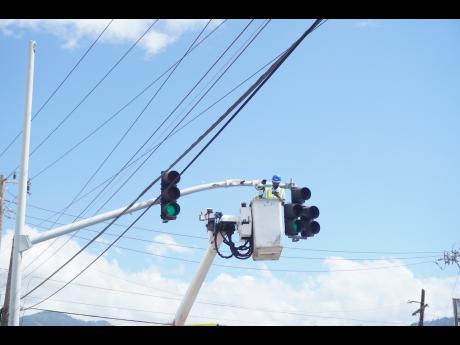 Technical personnel from the Ministry of National Security conducting maintenance of the cameras that are a part of the JamaicaEye programme, in St. Andrew, recently.

The national closed-circuit television (CCTV) surveillance programme dubbed 'JamaicaEye', has received high praises from the Ministry of National Security, for its success in assisting the police’s crime-fighting efforts and maintaining public order.

A public-private partnership launched in 2018, it was designed to network CCTVs owned by the Ministry as well as accommodate feed from privately owned cameras.

Registered private citizens are also able to share footage from their cameras with the authorities free of cost.

The system is monitored by trained, technical members from the Jamaica Constabulary Force (JCF).

Senior Director of the Major Technology Transformation Branch at the Ministry, Arvel Grant, said that JamaicaEye is being effectively utilised by the police.

“Right across the island where those cameras are, members of the JCF are leveraging those cameras in their investigations and to provide evidence for matters that are going to court,” he noted.

He shared that the programme has also aided the police in its traffic management activities along thoroughfares across the island.

“The system is used every day in managing traffic around towns, having awareness of what's happening in and around the major roadways and being able to deploy officers to help manage and control the flow of traffic. It has also been used to identify vehicles that were involved in accidents,” he indicated.

Mr. Grant said that since the launch of the initiative, the Ministry has increased the number of cameras that are a part of the system, put measures in place to ensure sustainability, and put arrangements in place for maintenance of the cameras and to conduct repairs.

According to Grant, JamaicaEye is a part of an overall thrust by the Ministry to transform the security architecture through investment in improving the infrastructure, mobility, intelligence and technology of the JCF over the next few years.

“There are about 30 key technology and modernisation projects taking place between the MNS and JCF, and JamaicaEye is just one of those projects. So it's coming from this background of trying to improve the efficiency of the force and expand the JCF communication network, so all of these are projects that are going on is to improve efficiency,” he pointed out.

Mr. Grant added that the participation of private citizens is important for the continued success of JamaicaEye and encouraged persons to sign on to the programme.

Last year, a memorandum of understanding (MOU) was signed between the Ministry and the Jamaica Gasolene Retailers Association (JGRA), which represents petroleum retailers, to allow JamaicaEye to connect to approximately 121 gas stations.

“We encourage everyone to look at the website. It will give you the background information that you need to understand how the programme works, and any questions that you have, feel free to reach out to the team. We can help you with technical specifications for cameras and… to help you to connect to the programme,” he noted.

Mr. Grant also indicated that focus is being placed on increasing the number of cameras in the network.

“It's all about expansion whether through the installation of Government cameras or the private sector and forging partnerships. Right now, we are focused on expansion into Santa Cruz and Black River in St Elizabeth,” he informed.