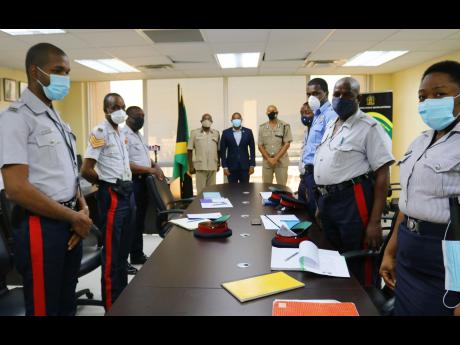 The Praedial Larceny Prevention Coordination Unit  is currently ramping up efforts to tackle farm theft over the Christmas season.

“The Ministry and the Unit have increased our resources and strategies to combat this. We know that incidents of praedial larceny increase significantly during the Christmas season, so there is a need for both farmers and law enforcers to heighten awareness and precaution to tackle this now,” said Minister of Agriculture and Fisheries, Floyd Green.

“This year, more than ever, we have to be extremely vigilant, especially with what has happened to our markets in relation to the recent rains. We are going to have to keep a keen eye out for persons who will see this as an opportunity to profit without putting in any work,” he added.

Minister Green informed that the unit has been experiencing some success in clamping down on this criminal activity, noting there has been an increase in the arrests of perpetrators.

“Not only are we seeing renewed energy and focus, we are also seeing greater success. Last year at this time, we had about 39 arrests for praedial larceny. This year, we are at 69. That is a significant increase,” he noted.

He commended the JCF for its renewed approach to praedial larceny, with officers specially assigned to tackle the scourge across the police divisions.

He said that the Ministry continues its efforts to strengthen praedial larceny prevention by, among other things, increasing the number of motor vehicles across police divisions as well as coordinating operations with stakeholders in the sector.

Green has urged greater vigilance among farmers to secure crops and livestock and to report incidents of the crime.

“We find that a large amount of incidents of praedial larceny still go unreported largely because farmers believe nothing will be done… but let them know action will be taken when the reports come in and that we are taking the necessary steps to address these reports now that we have dedicated units that are staffed and tasked to act upon these reports,” he said.

The Minister noted that while farmers are implored to protect their farms and livestock by ramping up security systems, the onus is on the authorities to make sure they go out and investigate and catch the perpetrators of praedial larceny.