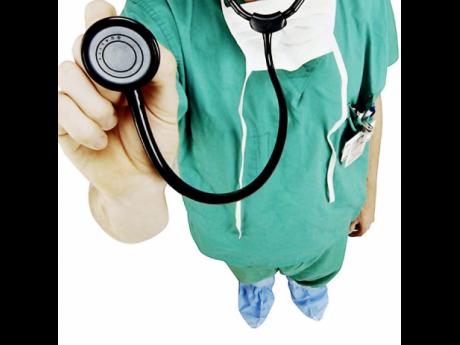 “Me a go lose my husband now,” was the thought racing through Kimberley Williams’ mind as she waited for more than five hours for her spouse to get medical attention at the St Ann’s Bay Regional Hospital on Monday.

Her husband, Kevaun Williams, 29, went to hospital after he started experiencing excruciating abdominal pains. They arrived some time after noon.

“After we did a screening to see what’s happening with him, they told us to sit outside under a tent and wait for a call. We sat outside for almost two hours and there was nobody that came to us. He said he wanted to go to the bathroom but he is heavy so I had a policeman help me,” Kimberley said.

The Priory, St Ann, resident shared that while Kevaun was vomiting and blacking out twice, she called out for help from healthcare workers.

“After I took him out the bathroom and carried him back outside, they gave me a wheelchair and I had to put him in it all by myself. He started crying and telling me, ‘Me cya manage, the pain getting worse. Me need fi lay down.’ Then I started crying out for help ‘cause we deh outside two hours now and nobody, not even porter nah help we,” the 26-year-old said.

‘That a nuh my business’

Kimberley said a nurse even told her “That a nuh my business. That nuh have nothing fi do with me,” when she asked for assistance.

Kimberley said Kevaun decided to lay on the ground to ease his pain started gasping for breath.

“Me start go crazy. You could see how he was suffering in pain and he eventually asked me ‘Jay, am I going to die?’. And I told him ‘no, yuh a go alright’ but I started to think is he really going to die because him start cry out ‘Me a go dead!’,” she said. She said Kevaun was on the ground for 15 minutes before he was assisted.

“At one point, they were even saying he was a suspected case of COVID-19. Even if he was suspected, give him the care, yuh a go make him lay down and dead?” she asked.

Kimberley told THE STAR that Kevaun was admitted about 7 p.m., being treated for appendicitis. She said he is doing much better.

THE STAR contacted the North East Regional Health Authority, and CEO Dennis Morgan said an investigation is currently under way.

“The video being circulated on social media was recently brought to my attention and as a result, I am meeting with representatives from the hospital medical team to ascertain the circumstances that led to the incident,” Morgan said.