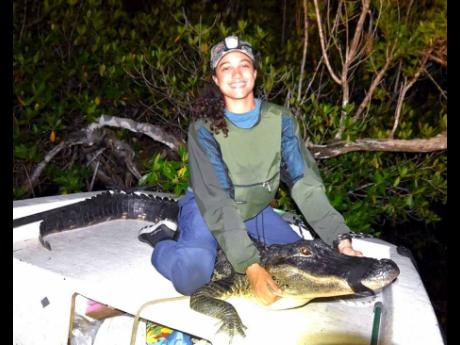 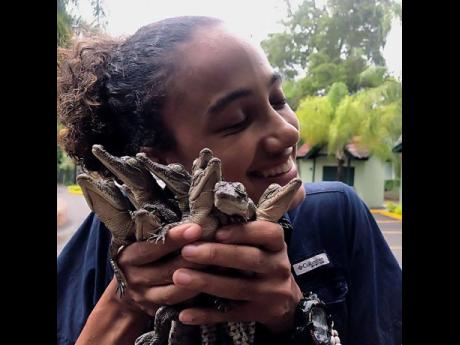 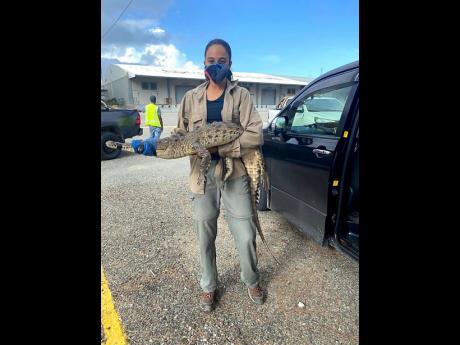 "People are always shocked that there's a woman catching crocodiles but I'm used to it now, I just love wildlife!" says Treya Pickling, who was ecstatic when she shared that she's the only woman on a team tasked with rescuing displaced crocodiles.

Pickling, a London native with Jamaican parents, is not afraid to be in the wild. She is a wildlife conservationist at the National Environment and Planning Agency (NEPA), and she studies Jamaica's wildlife with a focus on protecting the native species and their habitat, including the Jamaican crocodile.

During periods of heavy rainfall, the reptiles become displaced, often creating a spectacle, as members of the public try to engage them.

However, Pickling described herself as a voice for the misunderstood, in particular the crocodiles, as contrary to popular belief, the species are actually docile and shy.

"There are a lot of misconceptions surrounding them which instill fear in people and hate towards the animal and a lot of it is engrained in our culture. There is not enough appreciation for the species, which is unfortunate. They're a part of our island and Jamaica is unique because of it. That motivates me to continue what I'm doing to conserve and protect them," she explained.

She believes more outreach and awareness should be done so the public can be knowledgeable of the animals' behaviour.

"There's a high level of human-crocodile interaction and conflict and when they come into spaces with people, people react a certain way. But the good thing is, I have seen a shift in people's attitudes towards crocodiles on social media and I feel it's playing a part in education, but I think more can be done," the 24-year-old said.

Currently, she is leading a project on the Jamaican crocodile, aimed at determining population status and habitat availability for the species.

"Over the past two decades, crocodiles have been facing a lot of threat such as habitat loss fragmentation and poaching for their tail meat," she said. "Our crocodiles are the top predators and they maintain a balance in the wetland area. They are important for our mangroves and they keep rivers clean as they are opportunistic scavengers. That's why I tell people to appreciate our natural environment and be environmentally conscious."

NEPA reports that in October, the agency recorded 20 crocodile incidents, with only half of the cases involving crocodiles that had become displaced, caught illegally or observed during periods of heavy rainfall. Pickling noted her job has its ups and downs.

"I've had encounters where I'm verbally abused or even hit by someone because I'm there to retrieve the animals. But I've grown thicker skin, because you realise there is so much you can do and just keep focused," she said. "My days are a real adventure, not the typical 9 to 5 job. I have been given the opportunity to see some real gems on this island."