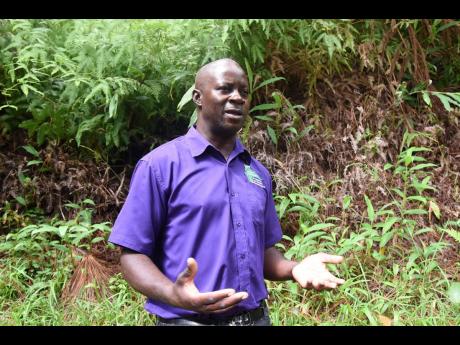 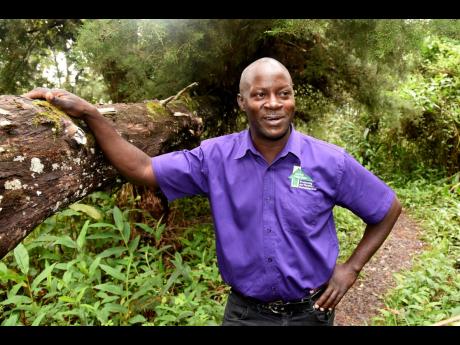 There has been much discussion in the public about the protection of the Cockpit Country and the forestry reserves. Lyndon Johnson, who has dubbed himself the 'police for the forest', is dedicated to keeping Jamaica green.

Johnson, 44, a forest ranger employed to the Forestry Department for the last 10 years, has been combing the forests daily, ensuring the prevention and detection of illegal activities such as cutting down of the trees and bird-shooting out of season.

His inclination to the job is due to his love for Jamaican flora and taking nature walks.

"Protecting my home and protecting my forest is one of the best things I could ever do," the Redlight district resident said, beaming with pride.

While taking the news team on a tour of the breathtaking scenery of the Holywell Park, he identified every tree without hesitation.

The evident increase in temperature at the botanical park, on the border of St Andrew and Portland, does not give him the chills, as he has grown accustomed to the comfort it gives.

Though he admitted the job can be tedious at times as it takes physical activity, he said he gets great satisfaction from it.

Among his duties, Johnson identifies persons cutting trees and doing coffee farming in the Blue and John Crow mountains, which are not permitted under the Forestry Act of 1996.

For the 30,000 hectares of the Blue and John Crow mountains which he polices, he believes greater protection should be provided for the area.

"Sometimes you see a truck with lumber and you question where it is from. I can stop the truck and seize it, because there should be documentation where they get it from. The laws are there and in some areas, they are doing a bit of strengthening. A lot of persons, especially the older ones, say 'Me think the pine tree a the forest tree'. But the law doesn't define what trees are forest trees, it says all trees are forest trees," Johnson said.

Under the Forestry Act, if you cut a tree in the forest reserves without a permit, you can be fined up to $500,000 and/or imprisoned for two years.

Each year, the sidewalks of Constant Spring Road are lined with 'Christmas trees' being sold by persons to eager customers. But Johnson doesn't like to see it.

"Persons who cut trees are my enemies. It's like you cut away part of my life and my livelihood. I think we need to start back replanting trees, to maintain a balance," he said.

The Excelsior High graduate told THE STAR that Jamaicans should take responsibility for the trees, as they not only serve as a source of oxygen and most importantly, protect the watershed.

"If you notice over the last few years we have been complaining about water. If you don't have enough tree cover, you won't have enough water to sustain. That should be enough motivation for Jamaicans to maintain tree cover because it helps with rainfall and water aquifers," he said.

Although he has thought about operating his own tour guide company, Johnson has no intention of handing over his badge as 'forest police', because he says there is more to be done.