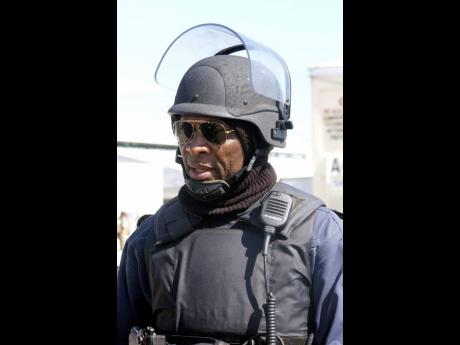 Retired Senior Superintendent of Police (SSP) Reneto Adams says the efforts and sacrifices of police officers and soldiers are undervalued. The former crime fighter, who received a medal of honour for both meritorious service and gallantry three years into his career, told THE STAR that there should be a higher award for crime fighters during national honour and award ceremonies. Members of the security forces tend to be rewarded Medal of Honour for Gallantry and for Meritorious Service.

The gallantry award is given for acts of heroism or great courage demonstrated in the face of extreme danger and the meritorious service is presented to persons who have performed distinguished service or have displayed distinguished conduct or bravery.

These awards, however, fall down the rank on the honours list, which is headed by the Order of National Hero; Order of the Nation (given to governors general and prime ministers); Order of Excellence (Given to any foreign Head of State or foreign Head of Government); Order of Merit (OM) (given to any person who has achieved eminent international distinction in the field of science, the arts, literature or any other endeavour); Order of Jamaica (OJ) (conferred upon any Jamaican citizen of outstanding distinction) and Order of Distinction (OD) (given to any citizen of Jamaica who renders outstanding and important services to Jamaica).

Adams believes that the honour for security forces should hold more ranking considering the 'life and death' nature of the job.

"Many of us in the police force who get meritorious award for certain duties performed of and above the call of duty, that duty is more prominent than what a man may get an award for. I don't want to demean people awards, but the comparison I want to make is that the policeman put his life on the line to perform a certain duty, when another man will get an award where his life was not impacted," the ex-crime fighter said.

"Persons are getting much higher graded awards like the Order of Distinction, which is higher than the Medal of Honour. So you find that people who do less than what the police or the army may have done, get a higher reward. You do a day's work and a man give you $30, and a man do quarter day's work or the same work with the same qualifications and him get $50. There is no equity. The equilibrium is not proper."

Adams says people deserve their awards and recognition, but not to the extent where the work of the police seems minuscule.

"A man may get a CD (Order of Distinction - Commander) because him can brush a guitar good. Nothing is wrong with that, but the policeman who is doing something that involves putting his life on the line, and sometimes even get shot, just get a little meritorious award," he said.

A total of 126 persons, excluding the uniformed groups, received National Honours and Awards yesterday. Of the 77 who received high awards (OM, OJ, OD), only three are members of the security forces.