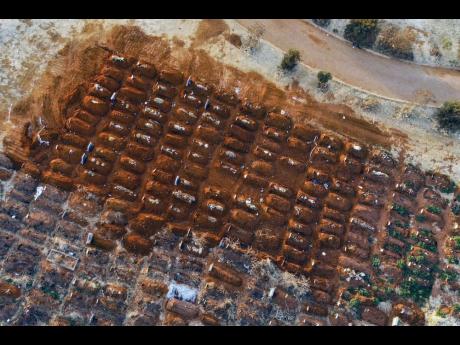 In this Aug. 5, 2020, file photo, recently filled graves are seen in the Olifantsveil Cemetery outside Johannesburg, South Africa. The worldwide death toll from the coronavirus eclipsed 1 million, nine months into a crisis that has devastated the global economy. (AP Photo/Jerome Delay, File)

NEW DELHI (AP) — Joginder Chaudhary was his parents’ greatest pride, raised with the little they earned farming a half-acre plot in central India to become the first doctor from their village.

For the coronavirus, though, he was just one more in a million.

After the virus killed the 27-year-old Chaudhary in late July, his mother wept inconsolably. With her son gone, Premlata Chaudhary said, how could she go on living?

Three weeks later, on Aug. 18, the virus took her life, too yet another number in an unrelenting march toward a woeful milestone.

Now, 8 1/2 months after an infection doctors had never seen before claimed its first victims in China, the pandemic’s confirmed death toll has eclipsed 1 million, according to a count by Johns Hopkins University.

That is partly due to the virus’s quickening spread through India, where reported deaths have topped 96,000 and cases are increasing at the fastest rate in the world.

The United States, where the virus has killed about 205,000 people, accounts for 1 out of 5 deaths worldwide, far more than any other country despite its wealth and medical resources.

“It’s not just a number. It’s human beings. It’s people we love,” said Dr. Howard Markel, a professor of medical history at the University of Michigan who has advised government officials on containing pandemics.

On a Thursday morning in February, Markel’s mother, 84 and infirm, was stricken by an illness later diagnosed as COVID-19. She died before midnight.

“It’s our brothers, our sisters. It’s people we know,” Markel said. “And if you don’t have that human factor right in your face, it’s very easy to make it abstract.”

Even at 1 million greater than the population of Jerusalem or Austin, Texas, more than four times the number killed in the 2004 earthquake and tsunami in the Indian Ocean, the toll is almost certainly a vast undercount.

Many deaths were probably missed because of insufficient testing and inconsistent reporting, and some suspect concealment by countries like Russia and Brazil.

And the number continues to mount. Nearly 5,000 deaths are reported each day on average.

Parts of Europe are getting hit by new outbreaks and experts fear a second wave may await the U.S.

The pandemic’s toll of 1 million dead in such a limited time rivals some of the gravest threats to public health, past and present.