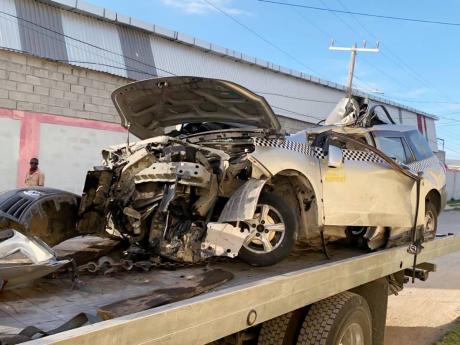 Former Rusea's High School football star Warren McDonald died at hospital from injuries he sustained in a motor vehicle accident which occurred along a section of the Point main road, on Wednesday afternoon.

Reports by the police are that about 3:15 p.m., McDonald and a female companion were travelling as passengers in a Nissan AD Wagon motor car, when the driver lost control of the vehicle which hit an embankment and overturned.

The three occupants were assisted by a passing motorist, who rushed them to the Noel Holmes Hospital where they were admitted.

McDonald is the third person to die in a motor vehicle accident along the same roadway in more than a week.

On September 15, 36-year-old Dillon Jackson, labourer, was driving his motorcycle from Lucea to his home in Hopewell, when he was hit from it by a motor car.

The police reported that Jackson was driving without lights. He sustained injuries and was rushed to the Noel Holmes Hospital, where he succumbed to his injuries two days later.

On September 16, another Hanoverian, 36-year-old Percival Godfrey, of Mosquito Cove, died from injuries he sustained when the BMW he was driving collided with a Toyota motor truck about 7 a.m. He was pinned inside the vehicle for more than an hour, and had to be rescued by a team from the Hanover Fire Department. He died at hospital.