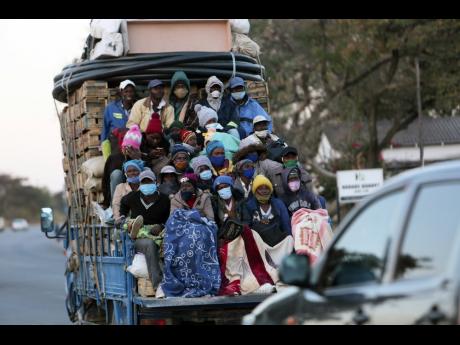 In this July, 22, 2020, file photo, an open truck carries farmers wearing face masks on the first day of the curfew in Harare. (AP Photo/Tsvangirayi Mukwazhi, File)

While experts say infection tolls in richer nations can be significant undercounts, large numbers of undetected cases are a greater danger for Africa, with many of the world’s weakest health systems.

The World Health Organization calls the milestone a “pivotal point” for Africa as infections in several countries are surging.

The virus has spread beyond major cities “into distant hinterlands” where few health resources exist and reaching care could take days.

Immediately knowing they were at a disadvantage, African nations banded together early in the pandemic to pursue badly needed testing and medical supplies and advocate for equitable access to any successful vaccine.

But Africa’s most developed country, South Africa, has strained to cope as hospital beds fill up and confirmed cases are over a half-million, ranking fifth in the world.

The country has Africa’s most extensive testing and data collection, and yet a South African Medical Research Council report last week showed many COVID-19 deaths were going uncounted.

Other deaths were attributed to other diseases as people avoid health centers and resources are diverted to the pandemic.

It’s all a warning for Africa’s other 53 countries of what might lie ahead. While dire early predictions for the pandemic have not played out, “we think it’s going to be here at a slow burn,” the WHO’s Africa chief, Matshidiso Moeti, said Thursday.

African nations overall have conducted just 8.8 million tests since the pandemic began, well below the Africa Centers for Disease Control and Prevention’s goal of 13 million per month.

Africa CDC director John Nkengasong said estimating the true number of cases on the continent is very tricky. Some 70% of infections are asymptomatic, he has said.