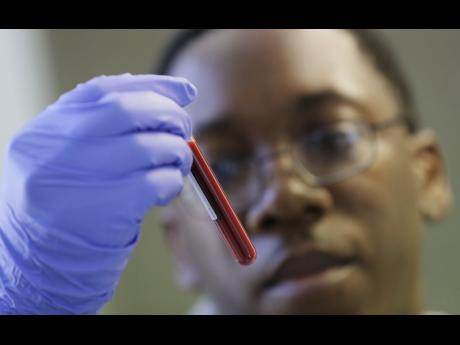 Leon McFarlane a research technician handles a blood sample from a volunteer in the laboratory at Imperial College in London. Scientists at Imperial College London say they are immunizing hundreds of people with an experimental coronavirus vaccine in an early trial after seeing no worrying safety problems in those vaccinated so far. (AP Photo/Kirsty Wigglesworth)

LONDON (AP) — Scientists at Imperial College London say they are immunizing hundreds of people with an experimental coronavirus vaccine in an early trial after seeing no worrying safety problems in a small number vaccinated so far.

Dr. Robin Shattock, a professor at the college, told The Associated Press that he and colleagues had just finished a very slow and arduous process of testing the vaccine at a low dose in the initial participants and would now expand the trial to about 300 people, including some over age 75.

“It’s well tolerated. There aren’t any side effects,” he said, adding it was still very early in the study. Shattock, who is leading the vaccine research at Imperial, said he hopes to have enough safety data to start inoculating several thousand people in October.

Since COVID-19 infections have dropped dramatically in Britain, making it difficult to determine whether or not the vaccine works, Shattock said he and his colleagues are also looking to test their vaccine elsewhere.

“We’re looking very carefully at the pandemic, at the numbers where the hot spots are and talking to collaborators that have the facilities to do these kinds of studies,” he said.

The Imperial vaccine uses synthetic strands of genetic code based on the virus. Once injected into a muscle, the body’s own cells are instructed to make copies of a spiky protein on the coronavirus. That should in turn trigger an immune response so the body can fight off any future COVID-19 infection.

Earlier this week, the world’s biggest coronavirus vaccine study started in the United States, with the first of 30,000 planned volunteers getting immunized with shots created by the U.S. National Institutes of Health and Moderna Inc.

Several other vaccines made by China and by Britain’s Oxford University, based on different vaccine technologies, began smaller final-stage tests in Brazil and other hard-hit countries earlier this month.

The World Health Organization has said multiple vaccine approaches are necessary for COVID-19, noting that the usual success rate for vaccine development is about 10%.

Shattock said there were numerous coronavirus vaccines now in clinical trials, and he predicted that at least some of them would prove to be effective.

“We have 20 vaccines in clinical trials, (so) we can be pretty confident that at least two of those will work,” he said. “It really depends on how strong the immune response needs to be to provide protection.”

Shattock said he was optimistic the Imperial vaccine would work, but must await the scientific data from the trial.

“I’m just going to hold my breath and wait to see,” he said.