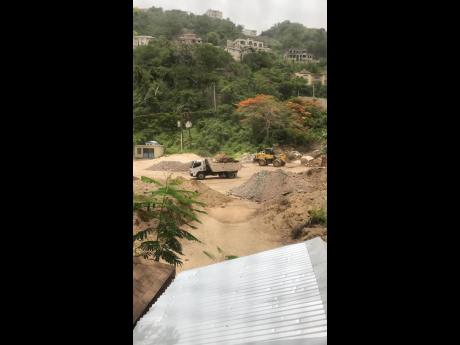 Residents in Meadowbrook, in St Andrew, say they have been stifled by dust from a site being dug by the National Water Commission (NWC) since 2017, and they have had enough.

Melrose Reid has been living in the area for 13 years, and highlighted her struggles with the dust nuisance.

"Some years ago they started to dump dirt around the area that they have a water plant. It is literally a dump for dirt and the dust is affecting the citizens. We cannot open our doors, windows or anywhere at all," she told THE STAR. "If I were to open my door just to get a little air in, I'm literally walking into my house in dirt. I can't get the chance to sit outside and have a meal because of the dust. It is everywhere. I could plant yellow yam in my house and it grow to how the dirt heavy."

In addition to the dust, Reid said that the the machines at the site have been creating noise pollution. She accused the agency of having no regard for residents.

"They have tractors at the plant and they work 24/7. There is non-stop loud noise when the dirt is being loaded in the dumper trucks. All I can hear is bang, bang, bang!" said Reid.

She added: "If this were happening in the day from 8 o'clock in the morning to 7 at nights, I could understand. But they are there all night. They go on sometimes until 3 o'clock in the morning and they blow horns and the workmen speak loudly. We have old people living in the area who have retired and cannot rest in their beds, and working people cannot rest to get up for work."

Another resident Toni-Gaye Donaldson told THE STAR that her family can't breathe.

"My entire family has horrible sinus issues, so living at home right now is a constant struggle. I have to be buying sinus medication regularly," said Donaldson. "My house is filthy because of all the dirt. Doesn't even make sense I clean it because suh yuh clean, suh the dirt a come in." According to residents, efforts to get NWC's attention have been futile.

"We have written to NWC, OUR (Office of Utilities Regulation) and lodged complaints to all the persons we know of, and we have even gone to the dirt sites to talk about it, and nobody has paid us any mind," said Reid. "I even went and spoke to a top manager at NWC abut two years ago." Donaldson said she has sent a number of emails to NWC about the issue.

When contacted, Corporate Public Relations Manager at the NWC, Andrew Canon, in a response to residents of Michigan Close, Leris Close and Meadow Way said the agency was "not of the impression that you were so severely affected so for that we sincerely apologise".

"We are at present exploring other options with respect to some of the particular operations that the NWC undertakes at our Michigan Avenue location and will decide on our next move soon," he said.