Poor and struggling - Clarendon man living in ‘pop down’ hut 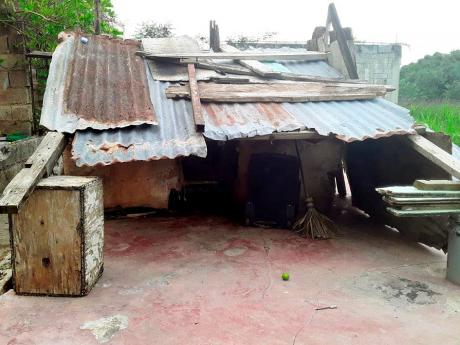 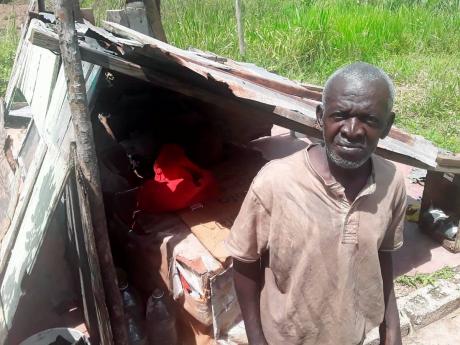 Leroy Andy in front of his 'home'. He is trying to build a better structure but cannot afford it. 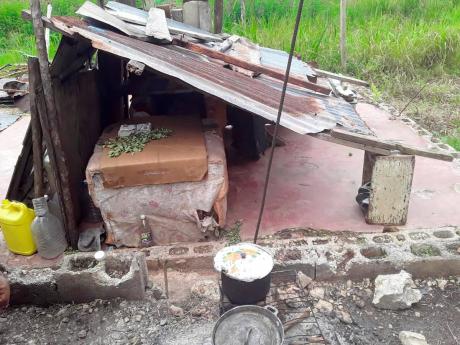 Only a dilapidated roof marks the remains of old Leroy Andy's plyboard house that collapsed a few years ago.

With no other place to call home, he has been living in a rather deplorable condition, sharing his dwelling with numerous rodents.

The 53-year old man said he is pleading for some assistance to finish a place he had started to build a few years ago, but tough times brought construction to a halt.

"Right now, where the house is pop dung on me. If anybody should come here and see how the place stay, it is not pretty. The housetop only have three zinc and it is leaking at the moment. Somebody even tell me to try and put better zinc on it," Andy told THE STAR. "All rat and ting in there, and insects from outside come in."

The hut which Andy now occupies is without a door or windows, and he expressed that he doesn't feel safe at night.

"I'm looking straight out a door, and the time serious now," he said. "Only the Lord knows what I'm going through."

He expressed that he doesn't make enough funds from his job at a mechanic shop to sustain himself and work on the house.

"Sometimes I don't even have food," said Andy. "It is a two-bedroom house, but it can't reach any further. I was going to put on the top, but nothing. Me just have to just live in the hut. Is two dresser I draw together as a bed; that is what I am sleeping on."

The man, who currently resides in Aenon Town, Clarendon, says he has reached out to political representatives, but his efforts have been futile.

According to Andy, life has never been easy for him after he lost his guardians at an early age.

"I use to live with my grandmother up by Linstead, but she sick out and dead when me a 15, and my father dead when me a 12. So a from that me deh pon me own, just a try to make life," he said.

A concerned neighbour who reached out to THE STAR, is hoping Andy can get some help urgently.

"Hurricane season now, so I can just imagine how hard it would be if anything should strike, him basically live outside," the neighbour said.