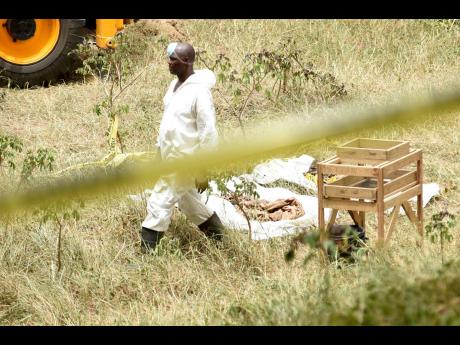 An investigator at the scene of a shallow grave in Rivoli, St Catherine, yesterday. The police believe that the site is used by members of the Clansman gang to bury their victims. 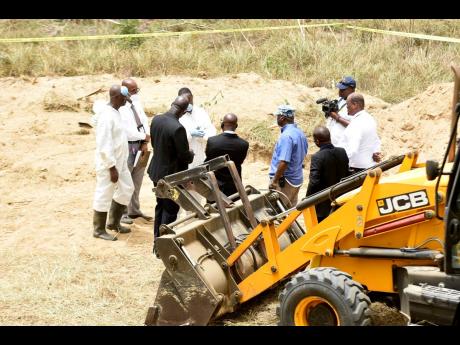 Acting Deputy Commissioner of Police Fitz Bailey said that for approximately two and a half years, the police have been receiving information that there was a possibility that bodies were being buried at a site. 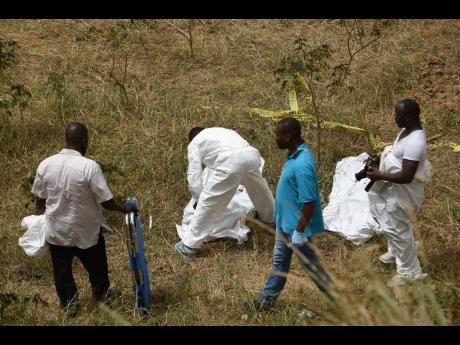 One resident said that the bodies that were found in Rivoli, St Catherine yesterday, may have been washed to the site and buried by heavy rains.
1
2
3

Police have been told for the longest while that bodies were being buried at Waterloo Lane in Rivoli, St Catherine, but it wasn't until yesterday that cops found evidence of it.

The remains of two humans were yesterday dug from shallow graves after members of the security forces conducted excavation in a section of the river bed in the Waterloo Lane section of the community.

Acting Deputy Commissioner of Police Fitz Bailey said that for approximately two and a half years, the police have been receiving information that there was a possibility that bodies were being buried at a site.

"This is what we believe is the major grave site of one of our major gangs - the Clansman gang," Bailey said. The senior cop said DNA technology would be used to identify the bodies, which he estimates may have been buried for at least four years.

The discovery of the human remains did not come by surprise to at least one resident, who unlike others, said that he had rumours that the river bed was being used as a burial site by criminals.

"Mi nuh really surprised still because a long time mi a hear say body a bury deh," a resident who spoke under a condition of anonymity.

"Mi never smell out here so like dead body yet, and mi never see anyone being buried there yet, only people will dash dead animal deh. But mi know say dem (security forces) guh weh with a whole heap a man from the area di odda day, so one a dem probably fall under pressure and talk," a resident said.

Bailey stated that based on their investigations, it is quite likely that they will unearth more than the two bodies already excavated.

"We were here last year and we came about three weeks ago but came up empty-handed, and we came back this morning (yesterday) and we have found at least two bodies. They were wrapped in pieces of clothing. On a previous occasion, we had found a pair of underpants and a shoe," he said.

Yesterday, as members of the security forces carried out their duties, a small group of females gathered close by, some of whom joked with each other that the lane was filled with vehicles, similar to when a round robin was being held. Others dismissed the police theory that the site is a burial site for the Clansman Gang. One woman said that the bodies may have been washed and buried there during heavy rains.

"A whole heap a pickney use to play on the river bank, even mi used to do it when mi a pickney. When the river come down, the water reach far, sometimes all inna people yard. Suh a could a body wash come deh. A nuh must anyone bury them there. The police come search before but a bare old clothes dem did dig up," one woman said.