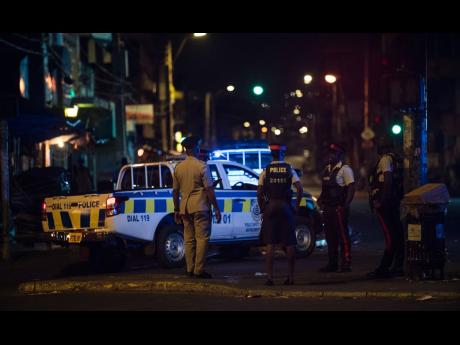 Members of the Jamaica Constabulary Force at West Parade in downtown Kingston, moments before the commencement of the islandwide curfew. 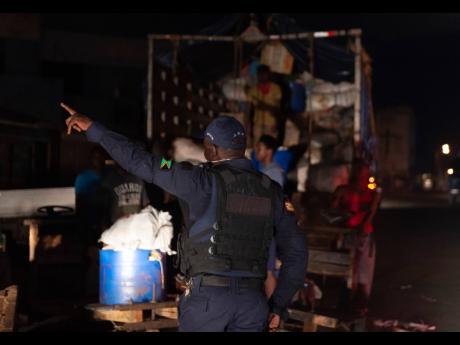 A member of the Jamaica Constabulary Force reprimands a group of men who were unloading farm produce at the Coronation Market in downtown Kingston on Wednesday during the time of the islandwide curfew.
1
2

Ten people were arrested on the first night of the one-week islandwide nightly curfew that was instituted by Prime Minister Andrew Holness to contain the spread of the coronavirus.

Among the 10 is 37-year-old Dayne Mitchell of Penso Street in Arnett Gardens.

Mitchell went live outdoors on social media during the curfew, hurling expletives at Holness and categorically disobeying the rules of the curfew. He was later arrested by the police.

A male resident of Arnett Gardens, told THE WEEKEND STAR that he supports the arrest.

"Mi support the Government because a fi we own good. If we nuh come off a the road, the thing a go spread and we nuh want it get outta control in a the community. Me support the police dem, man. Dem fi come off a the road a night-time 'cause dem nah do nothing pon the road. Me see the video and the 'ray ray' and me nuh support that none at all," he said, adding that the virus affects everyone.

According to the Jamaica Constabulary Force, "37-year-old Dayne Mitchell of Penso Street, who was seen in a viral social media video stating his refusal to comply with the curfew order, has been charged with breaches under the Disaster Risk Management Act. He is among 10 people charged for similar breaches last night."

Those arrested could face fines of up to $1 million or 12 months' imprisonment under the act.

Another resident says Mitchell's 'parries' should have been arrested as well for putting the community at risk.

"Dem fi come off a the road! Nuff a di yute dem weh in a di place a do them foolishness deh not even come from in a di area. Me nuh support dem thing deh. Di whole a dem shoulda get lock up ... dem give ghetto bad name," he said angrily. He believes Mitchell dug his own grave with social media.

"If yuh wah stay pon the road wid yuh fren dem, do that then ... but weh yah video fah? You did want attention? Well, the man dem will keep him company a jail," he said.

Another resident, a female, says she is obeying the curfew, but doesn't see its significance.

"Next week Wednesday we gone back to square one again. I support the curfew. It can be supported for the one week, but I say it don't make any sense. Dem only a run in people fi one week and yuh can't tell what that is going to do. If you a do a shutdown, you have to do a full shutdown," she said.