Father angry after teacher clashes with his son 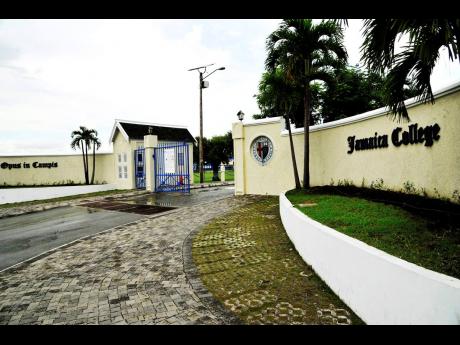 Gregory Hunt said he was moved to tears when he saw a video of his teenage son being "manhandled" by a teacher at Jamaica College last Thursday.

"It made tears come to my eyes, it made me angry because I don't deal with my child in that manner. The worse part about it is that mi youth was sick and in pain. The way mi see the man jerk him and a push him off really grieve mi," he said.

Hunt said he learned about the incident after his son came home looking ragged and complaining of migraine and shoulder pain.

"No one from the school called me to inform me of what took place. When my son came home, I saw that he did not have on any buttons on his shirt. He told me the story and I reached out to his form teacher who told me her version of what happened. She is the person who can be seen telling the teacher (on the video) to leave my son alone," she said

A viral video clip of the incident shows the youngster being dragged by an adult male while saying to another teacher 'Miss, yuh know say mi head a hurt mi'.

The boy later sat on a chair but was once again pulled away by the man. A woman is heard shouting 'Let him go, let him go, Sir. Let him go please'.

Hunt said his son has been suffering from severe migraines since primary school and Jamaica College was aware of the issue.

His son was supposed to be in a social studies class at the time of the incident.

"The teacher told him to leave because of his poor attendance to her class but whenever his migraine acts up, he can't do anything, so he spends a lot of time at sick bay. He went under a tree to sit, and his form teacher saw him and he explained the situation to her and she told him to go outside the class to sit," he said.

He added, "My son said he just moved the chair from one section to the next side and he assumed the teacher felt disrespected. Him tell him that his head was hurting him but the man say him never business and just start manhandle him. All of that affect my son severely because his head was hurting him. Right now he (his son) is embarrassed to go back to school. He is traumatised by the ordeal."

THE STAR reached out to the principal of the institution for a comment but calls to his cellular phone went unanswered.