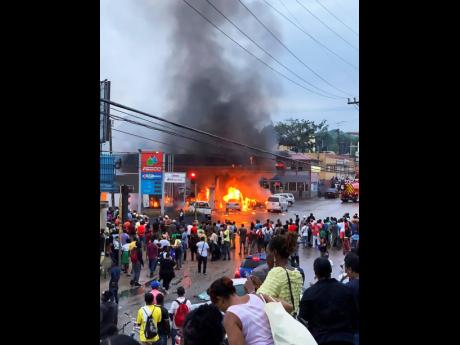 The popular Heaven’s FESCO Gas Station in Mandeville, Manchester, was razed after a series of explosions.

Energy Minister Fayval Williams says the Government is focused on ensuring the highest standard of safety in the petroleum trade.

This follows an explosion and ensuing fire that damaged a section of the Heaven's Fesco Gas Station in Mandeville, last Friday.

Seven persons were injured, one of whom, Daniel Farquharson, a mechanic employed to the station, later died.

Williams visited the facility on Sunday to meet with management and staff as well as to get a first-hand view of the damage.

Speaking at a press conference held at the Trafalgar Road offices of the Petroleum Corporation of Jamaica (PCJ) yesterday, she noted that while the station passed all safety checks done last year, it was recognised that there are gaps that need to be addressed.

"This is something we would not like to be repeated at any one of our 320 stations across Jamaica. I know that there is much to be done in terms of the petroleum trade. We have draft regulations that we've been working on - we want to get those out, we want to ensure that safety in the industry is paramount. We want to ensure that staff is being trained on a frequent basis to recognise danger signs at the stations at which they work," she said.

Williams noted that even though the turnover of certain jobs at gas stations is quite high, "that does not excuse the owners in ensuring that as soon as new people come on, that the training is done so that it heightens their awareness of the safety regulations at the service stations at which they work".

She further pointed out that the Government is working to finalise regulations governing the petroleum sector during this year.

She said that the laws are to be amended to include the many recommendations that came out of the Petroleum Trade Reform Committee in 2016.

The recommendations include the inclusion of occupational health and safety provisions in regulations to ensure proper working conditions for petroleum sector workers, and re-establishment of a Petroleum Safety Inspectorate as a department in the Ministry to regulate, oversee and monitor the petroleum sector.