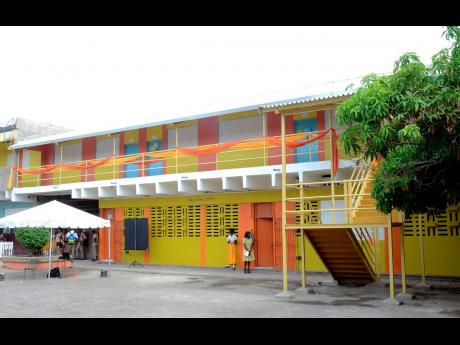 The four Donald Quarrie High School girls who created quite the buzz on social media last week will see better days at the institution, according to principal Talbert Weir.

The girls, who got five days suspension for their expletive-laced barbecue promotion, will have to join the performing arts group when they return to school next week.

"During the period of their suspension they are on intervention counselling, so they haven't been sent home to go and warm the chairs or bed. When they come back to school, they are going to become part of the performing arts group because it is very evident that they have talent that they are wasting. Being part of this group is mandatory," he said.

He said that once the social behaviour is altered, the academic performance of students will significantly change.

"When we (as principals) see talent being used in a negative way, we flip the script and we ensure that it is being used positively," he said.

He told THE WEEKEND STAR that during a meeting with the students and their parents, the girls expressed that the video was created when they had just finished their exams and were seeking a way to destress.

"The video created quite a stir but they were crying like crazy (when the administration met with them) and they were very apologetic. I asked them how they intended to remedy the situation. They were all begging not to be expelled because they thought it was an offence that requires expulsion. I told them that they had embarrassed the institution. They felt terrible and I felt their pain," he said.

They have since released another video in which they apologised, something Weir said was prompted by him.

In the meantime, he is advising children to use social media wisely because it is a medium where they can learn and develop themselves.

"One must think twice before they act because the girls indicated that they asked their friend not to release the video on social media. I would advise my young people in general that they should think. Ask yourself, 'Would my parents agree with me if I did this particular behaviour?' If they won't, don't do it," he said.