Son clings to hope as mom missing since last Friday 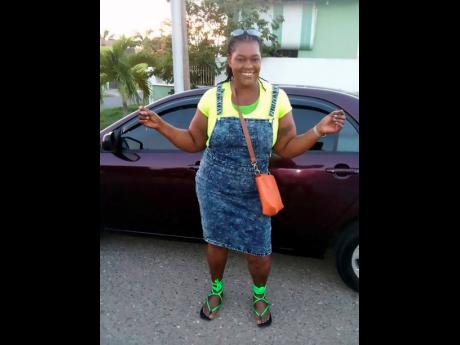 Damani Wellington did not have the words to express how distraught he was at the disappearance of his 56-year-old mother, Sheila Dunn.

He told THE STAR that last Friday, he left his home in Greater Portmore, St Catherine, which he shares with his mother and brother, to get groceries.

When he returned, his mother was nowhere to be found.

"Friday she walked out from the house sometime after four and we nuh hear from her since then. This is not the first time she leave the house. She do it a few times last year but she always go places weh her friends and our friends are, and they would call us. But this time nobody has seen her," he said.

Dunn, a mother of three, suffered a stroke in 2018. According to Wellington, she cannot talk and she is still re-learning how to write.

He said that since she went missing, he has alerted other family members and his mother's church family. They have been searching the sections of Portmore but to no avail.

"I have been teaching her how to write and say what she wants but she is not there as yet. We search all a Portmore, from the mall to Bridgeport. We spread the word and tell all the family members that we can't find her. When I left the house she was in a dark dress with flower design and sneakers. She has locks," he said.

He told the news team that he has had sleepless nights since his mother's disappearance. He said that he usually wakes up and starts his day taking care of his mother before he goes to work.

"I can't sleep well but I have to shut my eyes and try sleep because of work but it don't feel good fi know seh mi deh here and I don't know where she is. We are devastated. We reported the matter to the 100 man (Greater Portmore) Police Station but wi nah get no information. We nuh know if she eat, if she drink water, nothing. This is hard," he said.

He said that his mother has always been there for him.

"For the most part a me feed her and bathe her to ensure that she was OK. When she just got the stroke, we had to help her eat and those things because she couldn't move much, but she started to practise and she was getting better. Right now all that is carrying me on is hope. This is affecting me but I have to be keeping the faith and hoping that she is OK and we find her soon," he said.