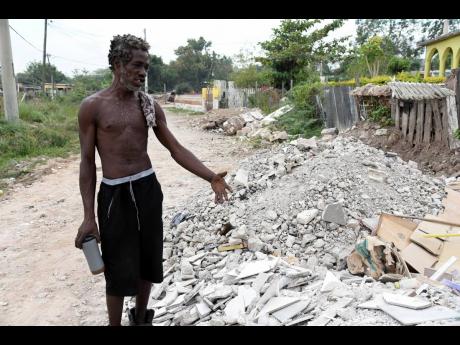 Anthony Panter, a resident of New Haven in St. Andrew, points to debris that he used to patch roads. 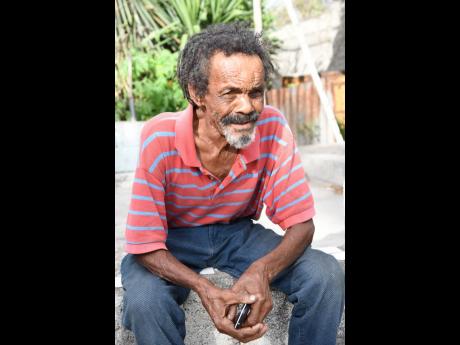 Herman Bailey complains about the dust in the community that has caused his asthma to worsen.
1
2

New Haven in St Andrew is plagued by a throng of issues, among them being bad, dug-up roads that give rise to immeasurable dust during the dry time, and damaging floods during a rainfall.

Blanch Allen has been living in the community for over 10 years. She told THE STAR that she is not convinced that enough is being done to alleviate their struggles.

"We need help," she said. "When rain fall, the place flood out. We nuh see nuh politician or nobody come through come look pon we or nothing."

New Haven falls in the West St Andrew constituency, which is represented by three-term member of parliament Anthony Hylton. Repeated efforts to contact him by telephone proved futile yesterday.

Anthony Panter, 50, has been living in New Haven all his life. He said that it is a struggle during the dry times to keep dust out of their houses. And whenever ir rains, they get flooded out because of poor drainage in the community.

"It affect we bad, enuh, but we just affi gwane live wid it cause we caa do better. The MP weh a run bout yah, we nuh know dem. Dem just a run bout yah. Me a 50 now, and a long time me deh yah wid it suh. Pon a windy day, a dead we a dead ova yah," he related.

When THE STAR visited the community yesterday, Panter was seen spreading heaps of dumped building materials such as concrete along one of the many dirt roadways in the community.

"A me affi a try build road fi water no sekkle. Me affi get di dirt, dump it and spread it out cause when rain fall round yah suh, water high and gone inna everybody house. We need something fi gwane man."

Herman Bailey 84, says he is constantly ill, and the dust in the community is to be blamed.

"I have asthma. I get regular attacks because of the whole heap of dust blowing around in the place. When it (asthma attack) tek me long and me caa bare it, me affi go to the clinic. Nothing else no worry me - just the dust and my asthma."