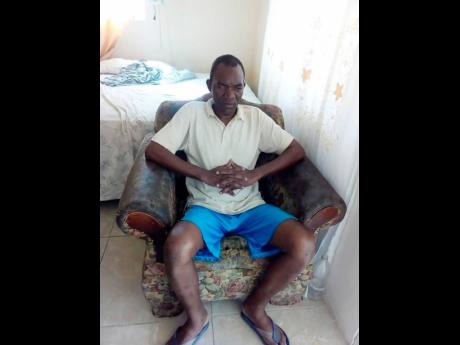 With four children depending on him for survival, Dean Whyte is not looking for handouts, but says he is willing to work for his pay if given the opportunity.

He told THE CENTRAL STAR that he is loaded with talent, from shoemaking to plumbing, but his disability is standing in the way.

Whyte is blind, and said that he is urging the public for assistance with securing a job in order to take care of his family.

"A lot of people don't want to employ me because I am blind, so they don't believe I can do electrician work and even plumbing jobs. I am the one who did most of those jobs on my house and I have no issue. However, there are people who will tell mi say 'No man, mi can't give yuh my work to do because yuh a go bun down the place because yuh can't see'. But that is not the case. There are persons who have given me work before and they were done to perfection and I always use them as reference," he said.

The 43-year-old Longville Park, Clarendon, resident, who for more than a decade worked as a security officer before losing his sight to glaucoma in 2015, said that his only source of income comes from selling DVDs. But that business is far from thriving.

"I spoke with one person and he told me that I have to remember that I am a blind person and the employers are going to choose the sighted above the blind the majority of the time. It is just bare roadblock. Right now I am surviving by selling music and movie DVDs but that is really slow because technology has increased, so persons can now watch them things on them phone," he said.

His interest he says is in electronics, but he said that he would be very much appreciative of a job from any field.

He said that with four children to feed, he has contemplated venturing off into the entertainment scene as a sound system operator.

"I have built computers for persons in Longville Park. I have even format them as well. All I need people to do is to just give me a chance. Just the other day I was telling myself that maybe I need to build a sound system so persons can hire me for parties, weddings and so on. For now, I just going to have to be the person who provide my own job so I just keep coming up with ideas. I really don't have the resources to start a business either because I build a shop about two years ago but I can't afford to stock it," he said.