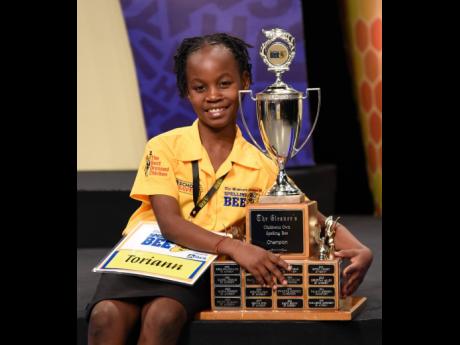 Toriann Beckford poses with The Gleaner’s Children’s Own Spelling Bee trophy after winning the national final on Wednesday.

On Wednesday, a brilliant and confident nine-year-old, Toriann Beckford, from McAuley Primary School in Spanish Town, St Catherine, captured the hearts of viewers when she was crowned The Gleaner's Children's Own National Spelling Bee champion.

Her biggest supporter inside the TVJ studios was her grandmother Winsome Hines, who stated that she is still on cloud nine and is extremely proud of the child who she has been nurturing since she was three months old.

Hines said she got Toriann enrolled in basic school at age two and it didn't take long for her to find out that she was an exceptional child.

"She was a brilliant student at basic school and she even read the valedictorian lesson at her graduation. She like to play and she play with dolls like other children but she is good at memorising stuff. Sometimes when I am helping her with the spelling and I am looking in the dictionary and calling a word, she would instantly correct me if I am wrong. If mi ever pronounce a word wrong and she get wrong, is not nutten normal between mi and her, enuh," she said between laughter.

She told THE WEEKEND STAR that she is proud that her granddaughter is now the toast of the old capital.

Hailing from the gritty March Pen Road community, Hines said she always encouraged Toriann and her own children to elevate themselves from the obstacles that they may face in life.

"I always tell her that she may be from the community but she is not of the community. When I go through my door and lock my door, I don't business with what happen outside," she said.

She professed her undying love for her granddaughter even stating that she has plans in store to pay her college tuition.

"Tori told me from she very small that she wants to become a doctor and you know what I did, I buy some cows and tell her dad that just in case I die before she start going to university, that is what he should use to take care of her education," she said.

Another woman who is also overjoyed at Toriann's victory is her mother Sanique Slater. Though she has been living in Westmoreland, she made the trip to the Lyndhurst Road studios.

"I was there in Kingston on Wednesday to cheer my daughter on," she said. (But) mi sit in a the lobby and watch it on the TV."