No worries man - Jamaican teacher in Wuhan not fretting about coronavirus 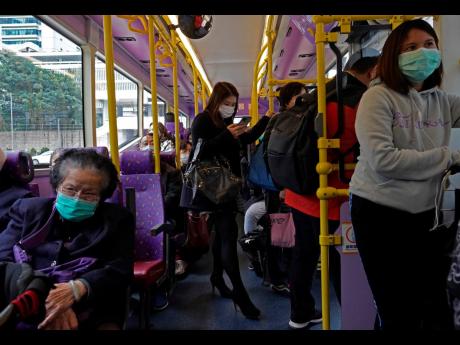 People wear protective face masks on a bus in Hong Kong on Tuesday. Hong Kong reported its first death from coronavirus, a man who had travelled from the mainland city of Wuhan that has been the epicentre of the outbreak.

Although the World Health Organisation declared the coronavirus as a global emergency last week, Sean, a Jamaican teacher living in China, says he is not worried because the government there is handling the situation the best way it knows how.

He also told THE STAR that he is imploring other Jamaicans living in the virus-prone area of China to remain calm while rubbishing claims that Jamaicans in Wuhan are running low on basic necessities such as food and water.

"Walmart is open between the hours of 10 a.m. to 6 p.m. so if I need food, I put on a mask and gloves and I go out. There is also the option of having your food delivered to you. I am really not worried about food being short as the government of Wuhan has displayed that they are competent in handling the situation," he said.

He, however, added that he would not criticise those who are panicking because the virus can be fatal.

More than 400 persons have been killed by coronavirus and more than 20,000 have been infected.

Other Jamaicans had expressed fears of running out of food and water, and were under complete lockdown.

But, according to Sean, while food is not dwindling, getting to a supermarket that has food sometimes proves to be a problem. The transportation system has been shut down in order to reduce the spread of the disease.

But he noted, "I can even rent a bike if I want to visit the Walmart if I don't want to walk. All I have been doing is staying at home watching YouTube, reading, talking to friends, exercising and sleeping."

Jamaica has implemented a travel ban to and from China as a safety precaution, but Sean said that he believes that the healthcare system is not prepared to battle the virus.

"I will be first in a room to stand up and puff out my chest and scream I am a Jamaican, but ... I have zero confidence in them to handle it. The first time I felt any anxiety or stress related to this situation is when I learned that there was a potential case in Jamaica," he said.

According to Sean, although he feels healthy, he is uncertain if he had contracted the virus because of the incubation period and the fact that it does not always display the signs right away.

"I am not willing to risk the health of my loved ones so to get out of that situation, it's best to remain where I am," he said.

The virus has spread to at least 16 countries. There is currently no known cure or vaccine.