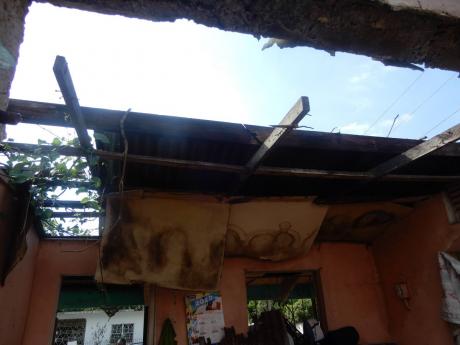 What remains of the roof of McMahan’s home is not very stable. 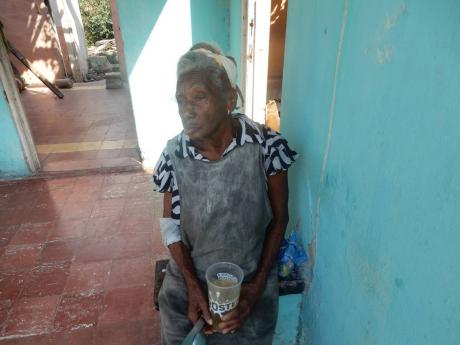 Carol McMahan reflects on her situation. 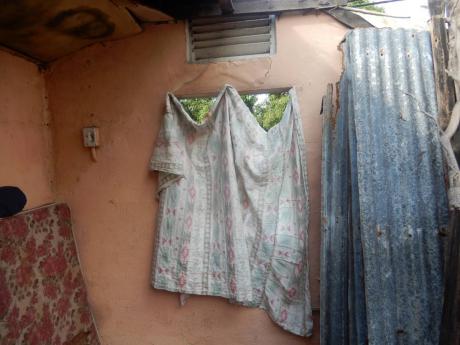 At first glance, one would think that the broken down house on Clarke Avenue in Hughenden only served to harbour stray animals and probably persons of unsound mind.

But this is actually where 80-year-old Carol McMahan has been living for the past several months.

McMahan told THE STAR that she is originally from Portland, but also lived in the Corporate Area for a time.

So last year when she damaged her arm while cleaning her then employer's window, she decided to come back to Kingston in search of work and lodging.

But the only lodging she found is far from ideal. What is left of the roof is held down by big stones, and the 'home' has no windows or doors.

A piece of sheet blocks out the rain or night dew that may come through where windows used to be. Despite her age, McMahan said that she is all about independence.

"Mi never waan sit down (after the injury), suh me did a see if mi can get some work too, but mi nuh really get any. I use to live in this community years ago and do domestic work for people but it's hard to get work now. But the people dem still look out for me and make sure say mi eat," she said.

She stated that she is fully aware that her home is an accident waiting to happen but says she sleeps comfortably and does her best to keep the place as clean as possible.

"When the rain fall it nuh really trouble mi although inside wet up bad. Sometimes mi move go round the other room where the roof is. Mi nuh cold a night time because mi have sheets and a sponge that mi sleep on," she said.

She grimaces during the interview, a clear indication that her right arm, which is partially bandaged at the elbow with a piece of cloth, still hurts.

Admitting it is not yet fully healed, she is hoping to get it medically examined soon.

"Mi have a X-ray to do. The doctor never finish with it but mi take it off one day, and a man come here and cut it so mi jus burn the rest of it. It hurt mi same way so right now is some Vaseline mi use and rub on it. Mi a plan to go KPH because mi know it nuh set properly yet," she said.

A neighbour stopped for a few minutes to tell THE STAR that she and others would like to see McMahan receive some much needed assistance.

"She is a really honest woman and we take care of her and make sure she eat but we would really want to see her get help. No one is going to interfere with her but she can't live there forever," the woman said.