Passion for food leads woman to open own restaurant 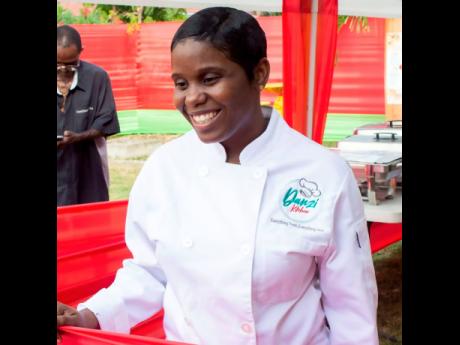 Though her degree was in mass communication, by the time Shericka Lewinson finished Northern Caribbean University, she hungered for a new career path.

She did various jobs, but nine months ago, the passion for food, that she had for years, evolved, and became a brand. Last December she officially launched 'Danzi's Kitchen'.

"It (the idea) came from my past boss. He had always been telling me that I could cook, and this was a great name. I wasn't sure what I wanted to do ... and then food came along again and it gave me the biggest joy," she said.

The business, located in the heart of May Pen, is home-based. She said that she is in the process of registering it so that she can start paying taxes.

"It is hard to get a good location in May Pen because there are places, but when you go there, there are sewage problems, and I don't want my restaurant to be just anywhere. I want it to be a household name where people can come and chill and eat," she said. "When I just started I did it at the back of my house and I moved to another location where the backyard space is much bigger and I can set up my kitchen. I am just focusing on my craft right now and getting my food perfect so that people get good food. I want to get the perfect location, so until then I will be working from home."

From a tender age, she has been playing around food. She said that her mother was always working and, as such, she had to teach herself how to get things done in the kitchen.

"When I was about six or seven I started to learn how to make dumplings. By the age of 10, I was cooking rice and peas. I don't like to always be eating the same things so I was always adding something new to my dishes. I was just the person to always try something until I perfected it, which is what I do now," she said.

Lewinson said she has been serving her meals to many persons in the corporate world, those who are most crazy about her spicy chicken dip.

"It has been such an awesome experience building the brand and name from scratch. I remember how I got started. I was cooking a meal for one of my friends and she said I needed to start mek people 'taste my hand', and I started out with $10,000, getting the logo and everything," she said.

Aside from the food, her talent for building sauces from scratch has enlightened many palates.

"I can use a bottle of Tropicana, any juice or fruit to build a sauce. My specialities are those with my spicy chicken dip and my pork. The concept behind food and for the kitchen is such a driving force right now. It is more than just preparing a meal for me. It is also how you deal with your customer too," she said.