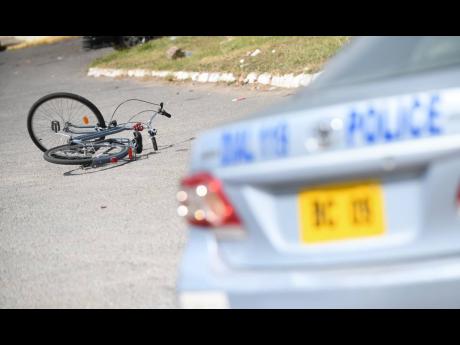 A police service vehicle is parked near the crime scene where a pedal cyclist was shot and killed by gunmen a few feet from the entrance to the Nannyville Health Centre in the Corporate Area.

One man was shot and killed at the entrance of the Nannyville Health Centre along Mountain View Avenue yesterday morning.

According to information from the police's Corporate Communications Unit, the deceased, 32-year-old Kenroy Dixon of a Roxborough, Kingston 3 address, was riding a bicycle about 11 a.m. when two men on foot approached him and opened fire. He was taken to the hospital where he was pronounced dead.

A knapsack that he was carrying was searched and the police found a Beretta 9mm pistol containing 18 rounds. Residents in the community said that they are disheartened by this incident.

"Wi nuh know him a who enuh, but him just come from out the clinic when it happen. When people a deal all around wi, wi have peace inna this area. We always a party and because wi peaceful wi always a get permit, but this a go mash up our thing now," one resident said.

The clinic was closed shortly after. One doctor related what happened to THE STAR.

"Everybody was traumatised. We had to bend down when shots started to fire. As old as I am, a the first mi ever witness something like this. Everybody is shaken," she said.