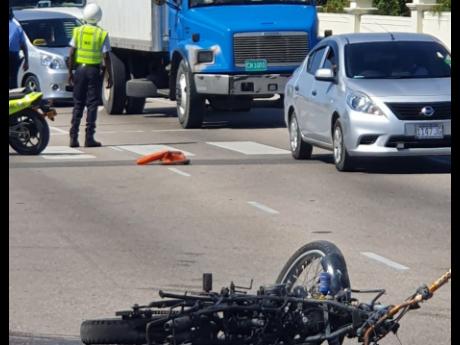 A policeman directs traffic on the scene of the bike crash along the Rose Hall Main Road in St James.

A man was killed this afternoon in a fiery bike crash along the Rose Hall Main Road in Montego Bay, St James.

The driver was burnt beyond recognition as his bike burst into flames on crashing into a truck at the stoplight near the Montego Bay Convention Centre.

One witness said passersby tried to help the driver, dousing the bike with water, but their efforts were futile.

"He seemed to still be breathing, but eventually, you could see he had taken his last breath," said a witness who was at the scene.

It is reported that the motorcyclist had just left the Flankers community and was heading towards Rhyne Park in Rose Hall.

He was making a u-turn when the truck slammed into the motorbike.