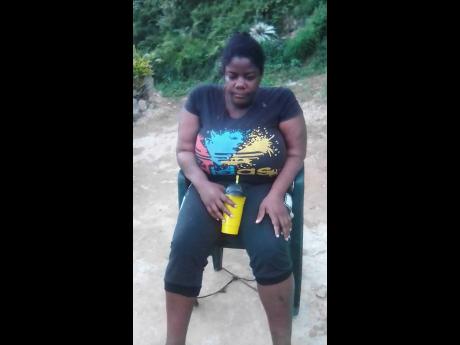 Since Charmaine Johnson's daughter Nikaylia lost her sight last year, she has been working to support her and her granddaughter.

But now Johnson is asking for the public's help as the burden has become too much.

Johnson and Nikaylia took their story to THE STAR last November, blaming the St Ann's Bay Hospital for Nikaylia's woes. They believed that not enough was done to treat her.

However, the institution denied any wrongdoing. The CEO noted that Nikaylia checked herself out against medical advice, was given medication, including antibiotics, and was told to return for further treatment, which she never did.

Johnson said that her daughter was a waitress and housekeeper before she went blind, but now she cannot do things on her own.

Johnson told THE STAR that since last year, doctors at the Kingston Public Hospital (KPH) recommended Nikaylia come there every month to see how best they could work on her sight. But Johnson said that the fare alone has been very strenuous for her.

"I really couldn't afford the money to carry her to KPH because it was $15,000 for the fare every time we had to go, and sometimes we were there for the entire day and don't get through 'til night. I sell my little peas, garlic, onions and those things, but sometimes it is not enough," the Brown's Town, St Ann resident said.

Johnson said that she even went to a private doctor out of desperation to see if and how her daughter's issue could be resolved.

She said that Nikaylia was prescribed some medication that gave her the ability to see shadows and silhouettes; however, she cannot afford it.

"The medication for her eye costs about $2,000 and she need to get it every month. When she take it, she can tell you when light is around her and when the place is dark, but she can't really see anything," she said.

Now, feeling that she has exhausted all other options, she is turning to the public.

"I am really asking for help to continue buying her medications and to put a little food on the table, because it is really hard. I get some help from persons giving me a $1,000 here and a $300 there and I am very grateful. I don't only have her but my granddaughter also to take care of and I just need some help please," she said.

* Anyone who is interested in helping Nikaylia Johnson is being asked to call her mother at 876-348-4410.