Teen dies after being misdiagnosed 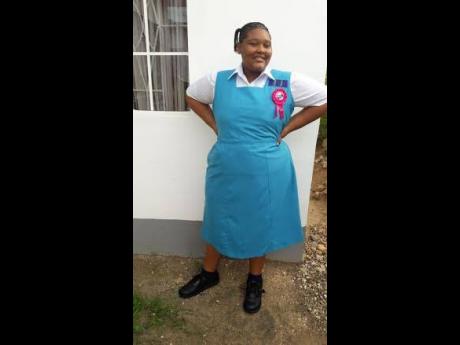 Tiffany Powell was known by almost everyone in Falmouth market and was even a 'friend' of the Chinese business owners in the town. She was also well-loved in Bull Savanah and other sections of St Elizabeth where she spent the first three years of her life.

In fact, last Christmas she spent the holidays with her grandmother and other relatives in Cheapside. Although she was just 13 years old, she was also her mother's business partner.

Young Powell had her mind set on becoming an attorney. However, the William Knibb High School third former will never get a chance to fulfil her dream of practising law as she took her final breath at the Mandeville Hospital last Saturday afternoon after battling a brief illness.

Janet Powell, Tiffany's mother, said that on January 10, Tiffany came home from school with the intention of going back on the road with her best friend to purchase dinner. That did not happen.

"She said, 'Mommy mi can't go anywhere again, my head is killing me. Please to close the window and door and make sure you don't turn on any light'. I told her that she was taking on much pressure at school because she participated in just about everything that the school was involved with," she said.

Janet Powell said that she took her daughter to Falmouth Hospital the following morning because she feared she had contracted dengue fever. The distraught mother said that she was told that Tiffany had sinus problems. The child was given an injection and a prescription.

"The next morning, when Tiffany woke up, I realised that her neck looked as if it was dancing. When I asked her why she was doing her neck like that she said that she couldn't do anything to control it and she felt like something was grabbing her in her head and she was in so much pain," she said.

Powell said that she took her daughter back to the Falmouth Hospital where a doctor told her that the neck movements were caused by the headache pressure. Once again, Tiffany was given another set of painkillers, but this did very little to quell the headache.

Upon realising that her daughter's condition was not getting any better, Powell took the child back to the hospital last Friday, where the doctors recommended a CT scan. The results came back normal.

"They gave my baby another injection and send her home. I left her at home with a caregiver and went to get the medications, but when I came back she was still sleeping. I somewhat felt relieved that she was getting rest but a few hours later, I heard her let out a moan, and when I went to check on her, she was wet all over. She had vomited up some green stuff and had peed herself. I tried to wake her but her eyes and mouth weren't opening. She just wasn't waking up but she was breathing," she said.

In a state of panic, Powell said that she rushed with Tiffany to the hospital once more.

"The doctor looked at her docket and then called me at the nurse's station and said there is nothing wrong with Tiffany and she just need to open her eyes. He said that she is spoiled and not acting like a 13-year-old because her foot was moving and all she needed to do was open her eyes. He kept saying her behaviour was not suitable for a 13-year-old and he was going to give me a letter to take to a clinic to have her checked," she said.

Unhappy with what had unfolded at the hospital, the worried mother took her daughter to Mandeville Hospital later last Friday. Emergency blood work was done and the results, said Powell, showed that Tiffany was suffering from meningitis.

"Tiffany was not just my only child but my best friend. I sell clothes in Falmouth market and sometimes when my customers come, they would tell me that they are not buying from me but they will wait until Tiffany come from school. She was a very friendly girl and she touched the heart of everyone who met her. I honestly don't know what I am going to do without her," she said.