Father and son among four held for illegal firearm 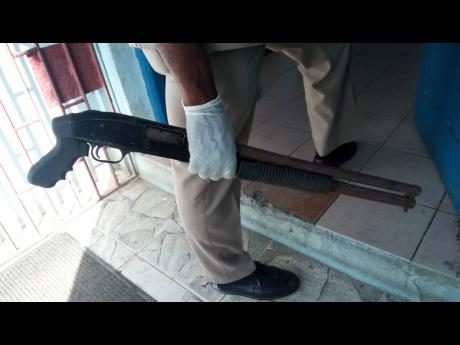 The illegal gun that was seized in Westmoreland.

A 59-year-old man and his 27-year-old son are among four persons who were arrested yesterday following the seizure of an illegal firearm and several rounds of ammunition, in Shantily district, Westmoreland.

The police have not yet released the identities of the accused, who are all said to be related.

Reports by the Savanna-la-Mar police are that about 2 p.m., a team of officers carried out an operation at the family house in Shantily.

During a check of the house, the lawmen searched a deep freeze refrigerator and found a 12-gauge shot gun, and five 12-gauge cartridges.

The man, his son, and his 25-year-old son-in-law, along with another teenage family member, were taken into custody.

The Westmoreland police reported that this is just one of their many operations aimed at ridding the parish of illegal firearms.

"The police will be targeting the criminals and will be getting the illegal guns, and we will not stop until we have rid the streets of the parish of illegal firearms, and these gunmen are placed behind bars," a member of the police team said.

Since the start of the year, more than four illegal firearms have been seized within Westmoreland, and a number of persons taken into custody.