Residents shocked as soldier kills spouse and himself 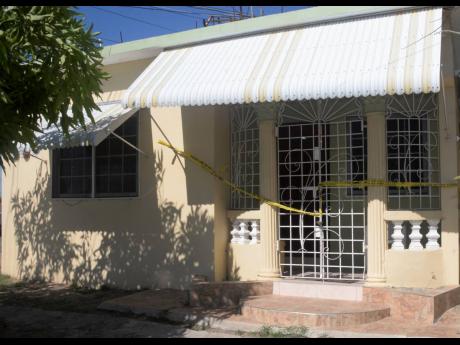 The home where McKenzie and Easy lived in Greater Portmore.

Residents of Four West, Greater Portmore, in St Catherine, were shocked early Sunday morning by the tragic end that met a couple some considered "loving".

Corporal Doran McKenzie, 34, who had served the Jamaica Defence Force (JDF) for 12 years, hacked and shot his common-law wife Suianne Easy to death, before turning the gun on himself.

Some residents said they admired the way McKenzie treated Easy, a nurse, and recalled that he always carried her things wherever they went.

But Fayth, who operates a bar that McKenzie frequented, said that things were not always smooth for the couple, and that McKenzie had expressed on numerous occasions the possibility of hurting Easy.

"Mi never tek him serious, even last night when him come and seh him a go do it. Mi call my husband and tell him fi come talk to him and him tell him fi walk away," she said.

Fayth said that McKenzie was not just a customer, but a friend.

"Him listen when mi talk. And she too when she used to come here. Bwoi mi nuh know wah fool him last night. Satan tan up in front of him last night," she said. "She lock him out already, enuh, so last night him seh if she lock him out, him a go come back over here. Mi sorry seh him never come back."

Fayth told the news team that McKenzie was making plans to buy a house and so even when he visited her bar last Saturday night while appearing agitated, she thought he was calm enough to go home.

"Wi a talk bout house and mi tell him seh today (Sunday) when him come from work, wi a go look pan a house. Him start talk to me bout what inna him house and a seh him daughter fi get the things dem," she said.

When THE STAR reached out to Major Basil Jarrett, the JDF's civil military co-operation and media affairs officer, he said that there are counselling services to help soldiers deal with personal and domestic issues.

"We also have a force chaplain who has staff dedicated to assisting soldiers who may have personal problems dealing with. The fact that this has happened perhaps is an indication that more needs to be done but a big part of the problem is that persons do not recognise the signs of stress and do not volunteer themselves to come in to speak to the counsellors," she said.

He said that the JDF has encouraged other soldiers to take a keen interest in what their fellow soldiers might be going through.

He added that they will be doing their own internal investigations, the JDF would be assisting the police.