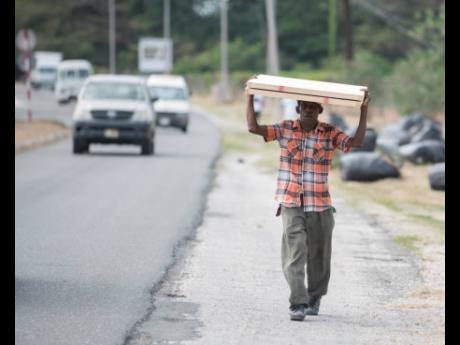 Basil Robinson, 53, walks under the weight of two large wooden doors as he journeys from Spanish Town to his intended destination of Central Village.

Four persons including a female and a teen are to face the court in relation to an illegal firearm and ammunition which were seized during an operation in Pondside district, Hamilton Mountain, Port Maria yesterday.

Reports from the Port Maria Police are that about 5 a.m., lawmen were in the area when a premises which was occupied by the four persons was searched.

Upon closer examination of the premises, one home-made firearm with one 12 gauge cartridge was found. They were subsequently arrested and charged. Their court date will be announced later. Investigations continue.

Detectives assigned to the St Thomas police division are seeking the public’s assistance in locating a witness who is vital to a case currently before the St Thomas Home Circuit Court.

She is Opal McGregor, whose last known address is Lloydsville district, in the parish. McGregor is scheduled to appear before the court on Thursday, January 16.

McGregor or anyone knowing her whereabouts is being asked to contact the St Thomas police at 876-877-0252, Police 119 emergency number or the nearest police station.

One Colt M16 assault rifle with a magazine containing thirty 5.56 rounds of ammunition was seized by the Police along Mountain View Avenue, Kingston 3 on Saturday, January 11.

Reports from the Elletson Road Police are that about 4 a.m., lawmen were on patrol in the area when a premises was searched and the weapon along with ammunition were found.

The initiative, to be launched on February 14, is intended to reduce the volume of polyethylene terephthalate (PET) bottles deposited at disposal sites in the parish.

It also forms part of efforts to heighten public awareness about the importance of preserving the environment.

Regional Operations Manager at WPM, Garnet Edmondson, said that the project will primarily entail scheduled collection and sorting of plastic bottles in the communities, which are to be identified.

“With that removal process, they [residents] will store and keep [the bottles] and we [WPM] will collect [those] every two weeks; that will be a part of the build up to our limited separation programme,” he explained.

He said the agency is also in the process of procuring a truck, “which will be solely dedicated to the collection of those plastic bottles”.

Edmondson said WPM will also be embarking on a public education campaign in schools, aimed at fostering a more positive approach to the recycling initiative.

Phase one construction of the tuition-free school, being spearheaded by charity organisation, Christel House Jamaica, is slated for completion by June.

The institution is being built in St Catherine at a cost of US$10 million with funding support from the US-based parent body, Christel House International.

The first phase entails building out of the kindergarten block through to grade six. Phase two, which involves the erection of the secondary school block – grades seven to 13 – is slated to start in five years.

The development is being executed on a phased basis to facilitate the school’s growth over time.

The institution will cater to 840 students, aged four to 18, from communities deemed underserved.

It is being built on approximately 10.4 acres of land in Twickenham Park, Spanish Town.