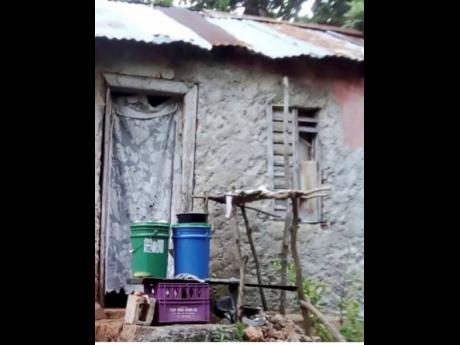 The front of the house in which Karen has been living for over 25 years. 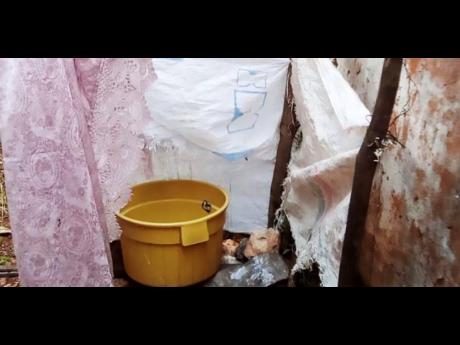 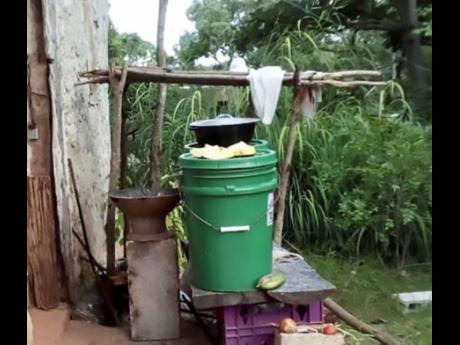 Karen has been living in an uncomfortable situation with her daughter for many years. Though she has a roof over her head at the two-room dwelling, the conditions are far from bearable.

The term 'roof' is even a bit of a stretch as it doesn't fully protect her from the elements.

"It's two rooms, and the tops for the two (parts of the roof covering the rooms) are leaking. More than one part ina di two rooms a leak, so when it rains, a problem ... bed wet up," she said.

Water is also an issue for the Pillar District, Manchester, resident.

"I don't have any running water inside ... I have to go to a pipe outside for water," she said. "I have a bathroom outside that I made with zinc and something. I have a pit toilet, and I don't have a shower. I use bath and my daughter has to do the same ... she is 17 years old. It's not a good condition for her to be living in. I also made a kitchen just like how I made the bathroom," she said.

Karen says the house is incapable of being repaired and is falling apart.

"It's a dirt house, and the structure is not proper because it's weak. I tried to knock on it to knock in nails and put up window curtains and it's chipping off. I've been living here for 25 years, and it was a little better before, but the hurricanes that have passed did a lot of damage to it," she said.

For more than two years, Karen has been getting help from her church (where she recently got baptised) and a family member to construct a new home in the same vicinity. However, it's incomplete.

"My cousin came one day and saw the house. That night, she called me and asked me if it's my house. She said she would start a foundation to put up one room. She buy material and made the foundation. Weeks before I got baptised, my pastor came here and she saw the condition of the house and started to help me," she said.

Karen has her fingers crossed as she is looking forward to having a proper home for her daughter.

"Three walls finished and reach at the roof height, and the other wall reach at the window height. They bought some steel, and they are here because they don't start to use them. I am hopeful that the house can be finished before this year ends," she said.