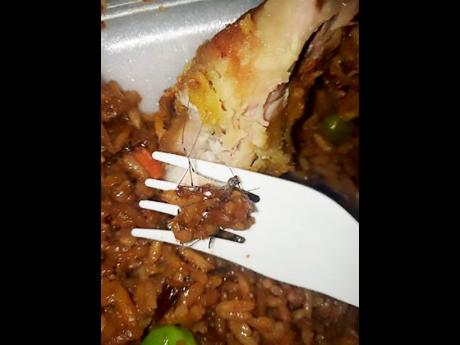 One of the spiders that was found in the Chinese food.

A St Catherine woman who decided to dine at a Chinese restaurant in the parish last month was left with an unpleasant taste in her mouth when she discovered that her meal was complemented with three spiders.

Joy Brown* said that she was working the night shift when she decided to purchase food at a well-known restaurant.

But after settling down to enjoy her meal, she was greeted by the unwelcome 'protein'.

"Usually, when we are on the night shift we would just eat at anywhere that is open at that time, so my friends and I went to get Chinese food. I got the fried rice and fried chicken and halfway through eating, I saw something that looked like thyme so I took it out. Then I saw two more pieces and I kept wondering why thyme was in the food because people don't usually use thyme in it, plus it was fried chicken, so none should be in that either," she said.

Upon closer inspection, Brown said that her stomach turned when she discovered that the 'thyme' was actually small spiders.

"Mi start show mi fren dem di anansi and mi then take two pictures of it before mi decide to carry it back go show 'Miss Chin'. Mi go by the counter and a call out to her but she nah ansa mi and then she finally look pon mi and mi say 'Hey, anansi inna di box', and den she come and just start fight the box outta mi hand. So mi hold on pon di box and still a tell har say anansi in deh," she said. "Next ting mi know she dip har hand inna di box and take out di anansi and carry dem go round di back. Den come back come tell mi say mi must go back go eat mi food. A when mi start cuss now and say mi want a refund and a so she give me back the $300."

Brown said she returned to work but approximately three hours later, she began to feel ill.

She said that she visited the doctor the following morning and was treated for food poisoning and rashes; she also got two days sick leave.

"When mi go doctor, mi could only afford to pay for the injection dem. Mi not even get a chance to fill all of the prescription because I couldn't afford it. We just have to be careful where we eat because I could have died," she said.

Brown said that she is contemplating suing the restaurant owners for her distress.