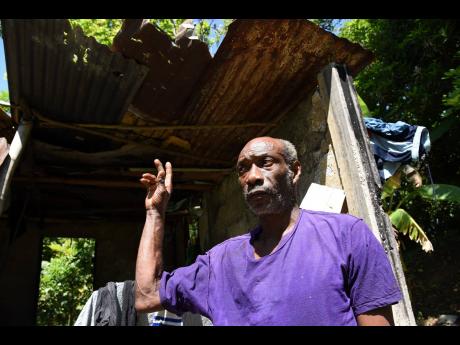 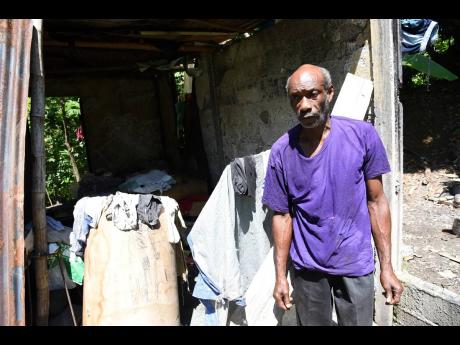 When Alton Bogle was asked if he was related to the national hero bearing the same surname, he proudly stated that he was Paul Bogle's cousin.

In fact, the 62-year-old grew up just a few metres away from where the freedom fighter called home in Stony Gut, St Thomas.

But as he glanced behind him to look at his old broken down home, his eyes welled up with tears, as he explained how fire of unknown origin had destroyed his dwelling last November.

"When mi reach back home, mi come see everything burn and up to now mi don't know what cause the fire. Some politician people did come here say dem a analyse the damage and say dem a come back, but mi never see dem," he said.

Bogle's home is now far from homely as there are no doors and the partially covered roof is an accident waiting to happen.

The smoke-stained walls tell the horror of what transpired nearly a year ago, and pieces of old rags are used to stuff in the spaces where the windows once were.

"Mi nuh have no toilet or anything and mi would like little help to build it back but mi can't afford it right now. It rough at times but God carry mi tru," he said.

As National Heroes Day approaches, Bogle said he feels proud of his cousin's accomplishment. He stated that growing up, his parents would often speak about his contribution to the nation but stated that most of what he knew came from past literature.

"My cousin was a good man. As much as how mi don't know him, we can see what him fight for. Only ting is that mi nuh tink him get enough credit because him place waan fix up. Him do a good ting for the people of St Thomas and Jamaica. If Paul Bogle did alive mi know mi life would be better right now because dem say him was a rich man so mi know him would a take care of him family," he said.

Bogle does not own a cellular phone but stated that he is seeking the public's assistance in rebuilding his home.

"Mi would really waan likkle help just so things can get back to normal," he said.