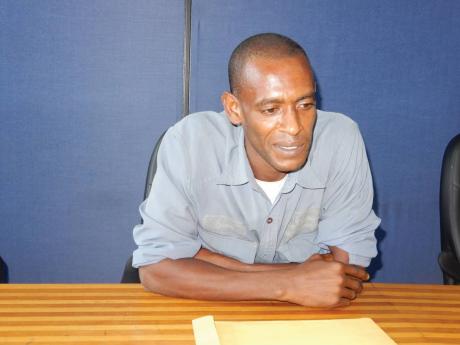 Raymond Brown wants his record cleared as he feels his past deeds have kept him from being hired.

Though he completed his sentence eight years ago, an ex-con believes that he is still paying dearly as he is unable to get a steady job because of his criminal record.

Raymond Brown served time for manslaughter, arising from a 2005 stabbing incident. And though the former soldier has attained various qualifications, he still only gets odd jobs.

Plus, for a year now, he has been living in an abandoned building on St John's Road in Spanish Town.

"I have sent out dozens of resumes and attended numerous interviews where I passed with flying colours. Some of them were even managerial positions but I never once got the job because of my criminal record. It is hard. I really want to work," he said.

While in prison, he also completed a course in automotive technology and did six CXC subjects (he has nine overall). After release, he started university but had to quit for lack of funds.

He is pleading with the Government to erase his criminal record as he wants to create a better life for his family and community.

"I really don't understand how the Government says they are putting special emphasis on rehabilitation. After all that empowerment that they give us, we can't use it to harvest our own wealth and create a better standard of living because no one is employing us," said Brown, who has two sons, one of whom he still provides for.

After leaving Dinthill Technical with only one CXC subject, Brown began working at a wholesale to send himself to evening class.

"I then went to HEART to get certified and shortly after I decided that I wanted to join the army. But just three weeks into training, I got news that my brother had been stabbed to death in Kent Village and that incident changed my life forever," he said. Brown admits he became "unruly".

"I would leave camp and go back home when I should be on duty. As a result, I used to get thrown in army jail and there were times that it would affect the way I dealt with civilians in the street while I was on patrol. I was angry so eventually, I asked to be discharged because it was like I couldn't stand seeing the uniform or anything. I was having a mental breakdown," he said.

Just months after being discharged in 2005, Brown stabbed a woman to death. He didn't give details of the incident, but said he was sentenced to nine years, two of which he served in remand.

When he was released, he was shocked that the victim's parents not only received him, but took him in.

"I lived with them for months. The victim's mother is a Christian and she forgive me and took me in. They treated me well but there were times when I knew they were going through a lot as it relates to their daughter's death, although they tried not to show it. I eventually left after a few months to try life on my own," he said.

Now Brown is asking for a fair chance to earn a living.

"My mother motivates me to keep pushing because I want to make them (his family) proud. My (younger) son is going to basic school and I ensure that he is doing really well," he said.