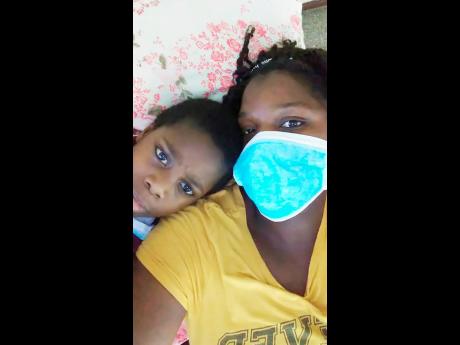 Renae and her son at the Cornwall Regional Hospital in St James. 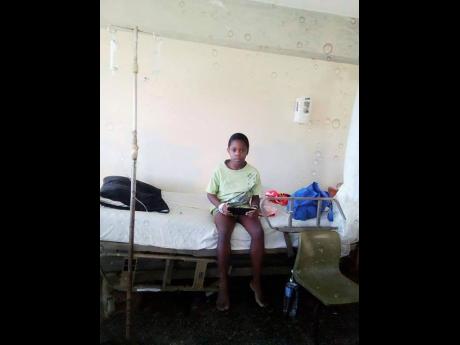 The past several months have been a nightmare for Renae Foster. Most of her days are spent at the bedside of her son, Dre Morris, who is currently at the Cornwall Regional Hospital in St James.

The six-year-old, who has been admitted at the facility since January, has been diagnosed with Aplastic Anaemia. This condition develops when damage occurs to your bone marrow, slowing or shutting down the production of new blood cells. Aplastic anemia leaves you feeling fatigued and with a higher risk of infections and uncontrolled bleeding.

Speaking with THE STAR yesterday, a burdened Foster said that she is now faced with the harsh reality that her son might die within six months or less of he does not get the assistance he needs.

"He is in isolation right now because he gets infections really easily. Last month, the doctors told me that he will die soon if he is not given the treatment that he needs and that can only be done overseas. It pains my heart to see him like this, because last year this time, he was a healthy child," she said.

The distraught mother explained that Dre's health appeared normal until he began having flu-like symptoms last October. However, prescription drugs would only temporarily treat his condition.

"It was like as him get better, him get back sick, and is not like him was always a sicky sicky child. Him then start have some rash and after that nose bleeding. After I took him to Cornwall Regional [Hospital], tests came back that he has Aplastic Anaemia. I really just want my son to get back a normal life. He is a very smart kid, so he knows that he is very sick, especially now that he cannot go to school and is isolated from the other patients. It pains my heart to see him like this," she told THE STAR.

According to Foster, there are days when she has to constantly reassure her son that he is not going to die.

"He keeps asking me: 'Mummy me a go dead? Tell mi the truth because mi know me sick bad', but mi always a tell him say him a go be OK because mi can't deal with the thought say him may die, so mi know him can't handle that news either. I am asking everyone to just help me save him life. No matter how small it is, we appreciate it," she said.

Foster said unless little Dre is able to participate in a study in the United States, he may not survive his illness.

She said that she is in the process of securing travel documents for herself and her son, but is unable to source the funds for travel and accommodation for their seven-month stay.

"I was told that the last person who had the condition and stayed in Jamaica died at the hospital, but the others that went away and got their treatment are alive. I am very optimistic that he will be OK because God is good and I don't think he will allow my baby to be taken away from me. He is going to have a very long life. I just need the help. I am doing everything in my powers to get the funds, but I still need a lot of help," she said.