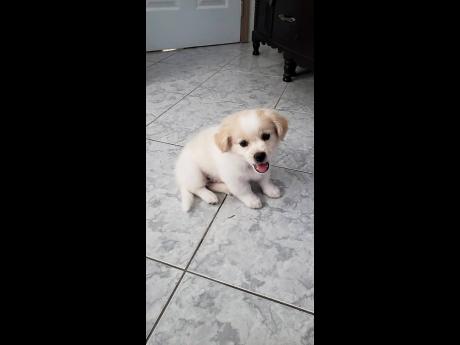 A cash reward is being offered for the return of a Shih-poo that was stolen from his home in St Jago Heights in St Catherine on Monday.

The dog's owner, Shenel Wright, said she is left heartbroken after the animal, who responds to the name 'Cotton', was snatched from their home as he played on the verandah.

She told THE WEEKEND STAR that a neighbour's camera captured footage of Cotton being stolen by an unidentified man.

"The guy just come and push his hand on the verandah, took him up and went away just like that. We haven't had this dog very long, but he is like family to us. We all miss him because he is smart and sometimes acts like human. I am really worried as I don't know if he is safe. He is very sensible and intelligent, so I know he misses his home," she said.

Wright said she is offering a $10,000 reward for Cotton's safe return. She is also imploring the male who stole the puppy to reunite the animal with his family.

"He may just be seen as a dog to him, but we love him and he belongs at home. I am asking persons to look out for him. Cotton is white and has a shade of brown on his ears and head. I have reported the incident to the police as well. I just want my dog, nothing else," she said.

Anyone who may know the whereabouts of Cotton is being asked to contact Wright at 876-364 2768.