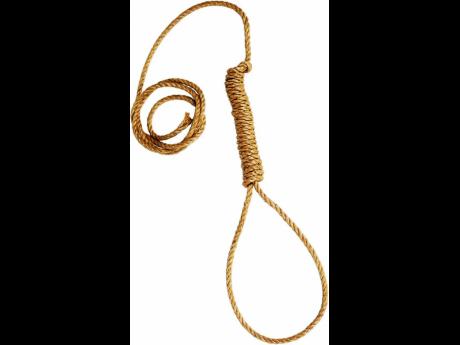 Tenants of a residence located on Wild Street in Allman Town say it remains a mystery why a senior who lived there apparently committed suicide, hours before obtaining test results for a nagging illness.

The Kingston Central police are investigating the death of 78-year-old Anns Simpson, though preliminary indications are that he committed suicide.

Reports are that about 5:30 a.m. last Friday, Simpson was found by a family member hanging from a length of rope from the ceiling of his room.

The police were summoned, the scene was processed, and the body removed to the morgue.

Residents are still trying to come to terms with the reality that he is gone.

THE STAR visited the community yesterday and the incident was on everyone's lips.

A passer-by was overheard saying: "A over there so the old man hang himself. Me still a wonder why him do that and the way how he did it too."

Our news team understands that Simpson locked himself inside his one- bedroom dwelling so that no one could reach him.

A resident said: "Him just a try escape the suffering. He was sickly and often cried for pain. Him seh no matter how him turn him a feel pain. That same Friday he was to go and pick up his test results at the doctor. He never made it to the appointment. His brother came to take him to the doctor not knowing he was inside his room dead."

Our news team was told that a section of the ceiling in the room was damaged, allegedly by Simpson.

A resident theorised that: "Him use a ladder fi reach up there, den it look like him break out piece of the roof and throw the rope over the beam, and a suh him throw up the rope and that's it. So we find him a hang."

Another resident told THE STAR that the deceased was an avid drinker and was warned to stay away from alcohol.

A woman told THE STAR: "After dem manage fi get in there, dem find a flask of rum and some medication inside the little room."

The Kingston Central police told our news team that investigations are ongoing.