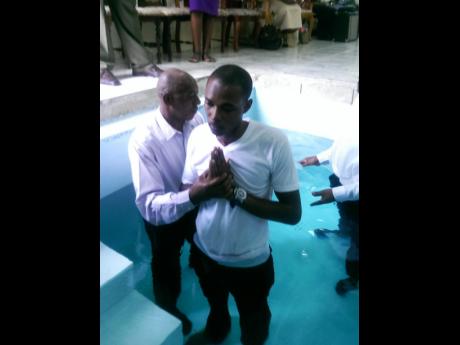 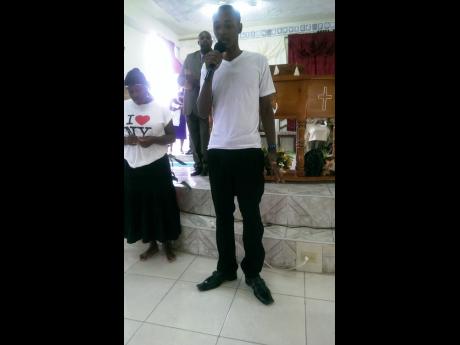 George Henry Williams testifies before being called into the pool at the Sanguinetti New Testament Church for his baptism.
1
2

The Bible says Jesus is willing to remarry the backslider, and such was the case for Orane Williams.Williams decided to exit the life of sin and return to the Lord, having started the Christian journey a few years ago but stopped along the way.

Williams recommitted his life to the Lord a few months ago and decided to retake his water baptism on Sunday, September 20 at the Sanguinetti New Testament Church of God, Clarendon. He was baptised by Deacon Glendon McDonald infront of a packed congregation at about 1:30 p.m.

He told Life and Times that prior to him being baptised, he discovered that to have the sacred act performed, as is commissioned by Jesus Christ in the Bible, he knew it was the correct thing to do publicly, so others could know that he has changed.

"I knew that it was the correct thing to do. It is a great joy in my heart knowing that it would bring a change and it would be for the best.

"At youth congress this year, I got saved. While I was there, I just felt that it was time for a change. Something pushed me and made me believe the change had to come. Nothing was going to stop me from getting baptised," Williams testified.

Williams said his return to his Christian journey did not come about by force or the will of anyone outside of Jesus. He said he knew he had to make the move to serve his Saviour.

Williams is recommends to those who haven't started their Christian journey to begin now. He wants them to know that Jesus is the only way.

Speaking from experience, the young convert said he was a sinner who used to attend dances and other places of amusement at nights, but when he woke up the mornings after, he realised the fun he had was all gone.

"Now that I am in the church, I know that I have salvation which will last forever. Only good salvation will last forever. Dances and other things, girlfriends and so on are only for a season, but salvation lasts forever. Make the move and come to Jesus before it is too late. The Bible tells us to seek God first and everything else will be added unto us. Seek God now and everything will fall into place," Williams said.