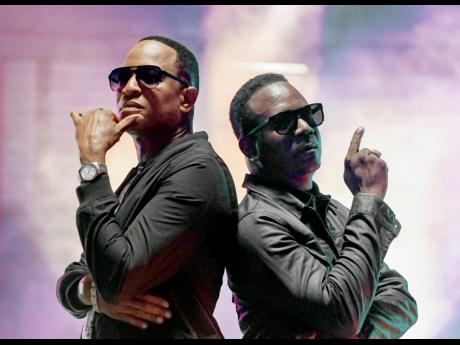 When Tanto Metro and Devonte performed at the virtual Reggae Sumfest in June, fire emojis lit up the livestream in appreciation of the blistering set.

Not only did they perform songs such as Gal Seh Woee and the Billboard hit, Everyone Falls in Love, they also gave a taste of the new, in the form of their recently released single, Nah Fren.

Produced by Zimbabwean beat maker Milton 'GeniusMintol' Kanongwah, Nah Fren is one of the songs the duo is actively pushing, in the hopes of it hitting mainstream.

"We had heard his productions and so when he asked us to do a song, we told him to send us a beat, and we really liked it," Devonte told Weh Dem Up To. The single was released in June, and has been soaking into the consciousness of music fans.

"The video was released early in October and the reason for the delay is that there were scenes that we had to shoot at night, and with the curfew and the COVID-19 protocols in place, it was challenging. But we finally managed to get it done," Devonte explained.

The singjay is thankful for the tremendous support Nah Friend has been receiving from fans, from countries like France, Uganda and Tanzania.

"We always knew that we had a strong fan base in Africa, and the thing is that the songs that they cherish are not always the same ones that are popular in the West. When we toured Uganda and Tanzania years ago, the song that we had to close every show with was Got News For You. We cannot come off stage without singing that song because it's the big hit in those places, when everywhere else, it's Everyone Falls in Love," he explained.

The artistes are working on their sixth studio album, which follows on the heels of their 2019 offering Reggaenometrist, which saw them collaborating with Capleton, Mykal Rose and young talent Million Stylez.

"The challenge of COVID has set us back in many ways with this album and tours," Devonte said, but he was also appreciative of the blessings. "It has forced us to get savvy with technology. We are working with things now that we used to deem 'too fast', but to survive we just have to come up to par. And one of the good things is that we have been doing more overseas interviews via the Internet. In the past, when we were promoting a song or album, we used to have to buy plane tickets and fly to these same places to do the interviews in person."

The yet unnamed album now has a mid-2021 release date.