Cruz Rock and Beenie Man team up for ‘Be Mine’ 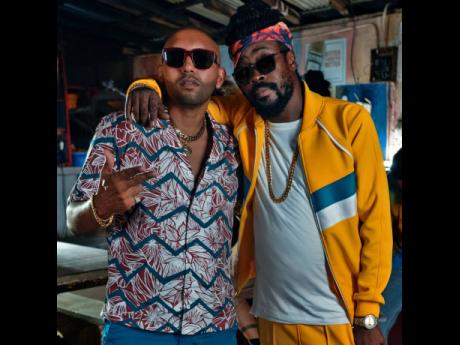 Since its release two weeks ago, Be Mine, the video for the collaborative single by singer Cruz Rock and Beenie Man, has racked up more than 480,000 views on YouTube.

The video was shot at Hellshire Beach in Portmore.

" Be Mine was inspired by my love for dancehall music. I have always wanted to recreate one of my childhood favourite songs or riddims and I remember when I first heard the Buy Out riddim several years ago, and saw how the world gravitated towards the sound. I wanted to give it my own twist using some Spanish lyrics and a reggaeton flavour," said Cruz Rock.

The single's Latin flavour blends with the dancehall beat to create a danceable and sing-a-long treat. Cruz Rock explained how Beenie Man got involved in the project.

"After creating the song, we knew that having one of the original artistes from the Buy Out riddim would be best for the feature. Beenie Man is one of my favourite artistes of all time so he was my first choice. Andrew Powell of Worl Blast sent the song to Beenie Man's team. Right away everyone who heard the song knew it was going to be big," he said.

"I do various genres of music including dancehall, reggae, reggaeton and more. My style is very versatile and I can switch from deejaying to singing with ease. I feel that I can bridge a gap between the dancehall and Latin world with my capabilities," he added.

Cruz Rock, given name Frankie Garcia, was born in St Croix, US Virgin Islands. He is of Puerto Rican and Trinidadian parentage. He currently resides in Florida.

"I come from a family of musicians. My father played in a Latin band in the 1990s and my sister was a singer. I followed in their footsteps and started my music career while I was in college. Since then I have travelled the world promoting my music and performing," he said.