NVasion looks to take over dancehall 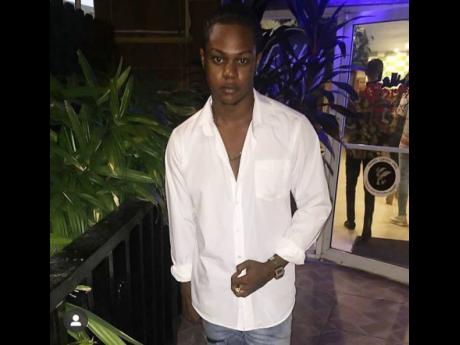 The video of the freestyle Dem Gal Yah Wicked has allowed dancehall artiste NVasion to get his break in the business.

NVasion, given name Trevani Young, hails from the Waltham Park community, and says he is ready to invade the dancehall industry.

"Even though the thing nuh large, get me a get a energy weh nuff big artiste get when them just start," he said.

NVasion, 22, started music as a means of providing for his family, having lost his father at age 14. He pulls from life experiences that he knows others can relate to.

"Me already know say nine-to-five is not for me, me love music," he said. Dem Gal Yah Wicked was done in April on BBC 1Xtra with Seani B.

"Me bad charge Smithy from England see Seani B at the airport and tell him, make NVasion go pon 1Xtra. But a week before me suppose to go perform, me bruk mi foot on my bike," NVasion said.

He explained that the song, which was released early last year, was actually a personal encounter.

"Me see a girl one night and say me a go test her to see if she would give me her number. So, we a reason and me end up ask her for her number. When me reach home, couple hours run off and me say, make me call dah girl here. Is a man rough voice answer the call. So me start laugh to myself," said NVasion. He says that experience is one that many men can understand.

NVasion says he is grateful for the recognition he has been getting online and is welcoming of the comments, both good and bad.

"Just expect the unexpected. Same way like how you see this just pop up so, there are a lot of things in the pipeline," he said.

He has been working on other projects with Quantanium Records and is known for other songs like Money Weh YuhG one and Drop Call.