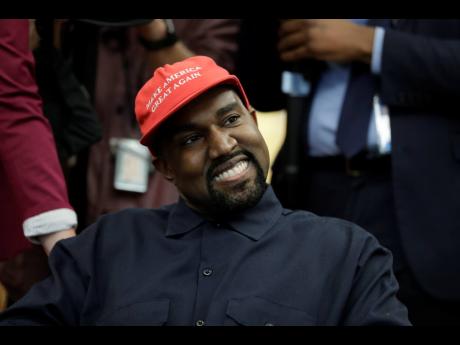 Rapper Kanye West wears a Make America Great Again hat during a meeting with President Donald Trump in the Oval Office of the White House in Washington in October 2018.

Although Katy Perry is a huge fan of Kanye West as an artiste, she doesn't believe he has the necessary experience to become America's next president.

"What we've learned looking back is that the presidential job is best suited for someone with experience and that is a pro in their field.

"I think we have seen and learned from experience that when we don't have pros in position, that it can get a little wild."

Kanye, 43, recently announced his plan to run for president of the US at the upcoming November election and said he will be running as a member of the newly founded Birthday Party.

When asked how he chose the name for his political party, he said: "Because when we win, it's everybody's birthday."

Kanye's running mate is a preacher from Wyoming named Michelle Tidball, and the pair's campaign slogan is simply: "YES!"

And while the Yeezy founder is confident in his ability to run a country, model and actor Tyson Beckford recently hit out at his intent to run for president, and encouraged Kanye to stick to what he knows.

He said: "This is where I always get into trouble because I speak the truth. I don't know what's going on, but he's really getting himself in a pot of tea that's not ready for him.

"I try to never speak bad. I've seen him and his lady, [wife Kim Kardashian West], do some positive things, and I kind of wish they would just stay on that. That vibe running a country - it's not an easy thing."