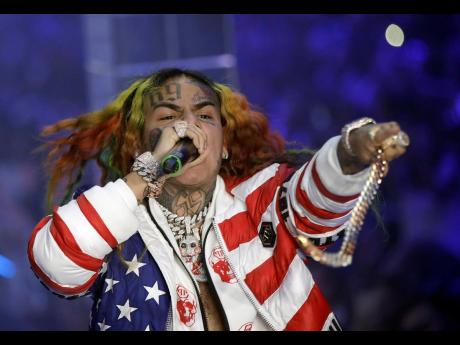 Tekashi 6ix9ine wants to be let out of prison to escape the coronavirus. The 23-year-old rapper - whose given name is Daniel Hernandez - was jailed for two years in December on charges relating to attempted murder, conspiracy to distribute heroin, and firearms offences. His attorney Lance Lazzaro has called for him to be allowed out of jail.

According to TMZ, Lazzaro wrote a letter to the judge on the weekend citing concerns for Tekashi's well-being while he's serving sentence.

It's said the star - who has already served 14 months of his sentence - suffers from asthma, which makes the respiratory illness more serious if caught.

The note also reveals the rapper "was diagnosed with bronchitis and sinusitis late last year" and was hospitalised for treatment".

According to his attorney, Tekashi wasn't allowed to see a doctor despite recently suffering from shortness of breath.

In January, Tekashi submitted legal documents in which he claimed staying behind bars leaves his life in danger because he testified against members of the Nine Trey Bloods street gang.

He added: "Given the significant and ongoing threat to Hernandez's safety as a result of his past and potential future co-operation, the government has filed papers that force Hernandez to remain incarcerated at a private jail in an effort to secure his safety. However, even at the private jail, Hernandez is still housed with various members of the Bloods."

The Gummo rapper's legal team highlighted that another gang member was almost killed in prison for denouncing the organisation.