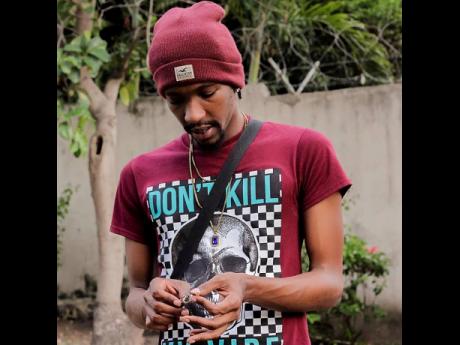 Bad Breed Music Group recording artiste Propa Fade is confident that he has what it takes to be the 'big man' in dancehall music.

"I'm one of the most versatile lyricists in the business right now. My lyrical style and my flow are on a higher level. I know I have the talent and the skills to be the next big star in dancehall music. I have the ability to be just as big as Vybz Kartel or even bigger," said Propa Fade.

The deejay, who hails from Cassia Park, is currently enjoying a massive buzz on the local music scene with his single Top Choppa.

The song, which was produced by Hemton Music, was released last December. Since then, it has been blowing up the local airwaves.

Top Choppa has signalled Propa Fade's arrival, and people are beginning to realise that he's going to be a force to reckoned with.

"I've seen a significant increase in the number of followers I have on Instagram. I'm also getting a lot of positive messages from fans about my music through all of my social media pages," he said.

Propa Fade is also promoting another single, Dream House, on the Sky Bad Music label. It was released along with a music video on March 1.

He is currently working on a mixtape and an EP. Both projects will be released later this year.

Propa Fade, given name Nikolai Dimitri Davis, is a graduate of Wolmer's Boys' School. He launched his recording career in 2011 with a single titled Out and Clean on the Young Vibez imprint.