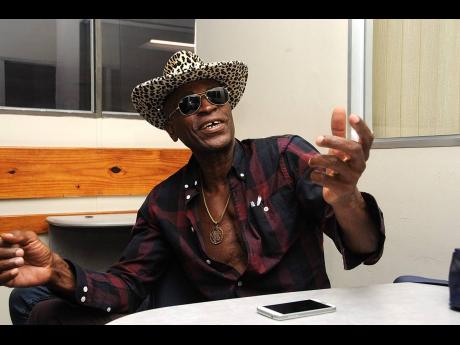 Veteran entertainer Eek-A-Mouse has been caught up in a firestorm of criticism for his week-long videos in which he has come out in support of the gay community.

In the videos, he is flying a gay pride flag, dressed in drag. He told THE WEEKEND STAR that he had plans to come to Jamaica this weekend, but would not give a definite date for his arrival.

He quickly added, "I won't wave my gay flag in Jamaica. I'll be a dead rat. But who knows, when I'm just a mouse.

"I don't care if they think I am gay or not. A few journalists were asking back in the day when I wore a certain costume," he said.

He has now done a video comparing himself to Robin Williams, who played the role of a divorced man who makes himself over as a cross-dressing nanny in the movie Mrs Doubtfire.

The veteran reggae and dancehall artiste is still finding time to do music and is focused on his career.

The entertainer, who is based in Sweden, told THE WEEKEND STAR that he will be going on yet another tour, starting July 26.

His official itinerary shows him being booked for concerts in Italy, at the Roots And Culture Reggae Festival; Bagnols Sur Ceze, at the Bagnol Reggae Festival, and also St Malo, both in France; Donderdag, Belgium; the Uprising Festival in Bratislavia, Slovakia; Gothenburg, Stockholm; and Uppsala in Sweden. The final show for this tour is set for Copenhagen, Denmark, on August 31.

"I will also be performing in Switzerland on July 31 with the great Buju Banton," the Mousketeer singer said.

A flyer from that event, the Border Splash Benefit Concert, shows Buju Banton as headliner, alongside Jamaican acts Richie Spice, Eek-A-Mouse and Major Mackerel. It will be held at the Geneva Convention Centre.

The months of April and May were also quite busy for the A Wha Do Dem artiste, whose roster saw him performing at several venues in the Netherlands; Montpelier and Bourges in France; Het Depot in Belgium, and a number of venues in the United Kingdom, among them, the Electrix Brixton in London and the Manchester Academy in Manchester.