‘The Blur Face Girl’ attempts to capitalise on diss track 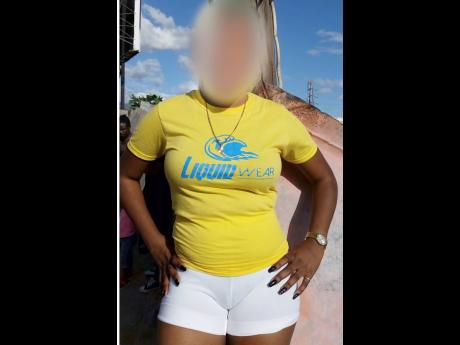 Part of being a successful artiste is putting on a good face for the public.

But for one aspiring female artiste, not showing her face will have to work for now.

Last month, the Spanish Town-based artiste, who has adopted the moniker 'The Blur Face Girl', released a recording, Weh Di Money Deh, which calls entertainers out for not managing their money and success properly.

"The men within my community, on the lane where I live, always call me out to deejay, and most times, I would hide my face when they record me with their mobile phones. But this time around, one of them said he could use an app to blur my face as I performed," The Blur Face Girl told THE STAR. "Normally, I would tell them not to post it, but this time, I agreed ... and it has spread like wildfire, and persons that know me have called to say they like my song, and I just tell them that it is not me," she said.

That is when she created an Instagram account as 'The Blur Face Girl'. Her first video has received more than 10,000 views, with persons requesting that the official song be released.

Although she is not ready to reveal her identity, she admitted, "I am not sure how I am going to keep my identity a secret for much longer."

She claimed that the reason for hiding her face is simply that with the buzz that the social-media page has created, she wants to test the waters to see the effectiveness of the gimmick in gaining fans.

But social-media vlogger/comedian Rawpa Crawpa has called Blur out for being "bright and fiesty" for speaking about the financial status of seasoned dancehall entertainers such as Mr Lexx and Stacious in the diss track and urged the public to share her identity.

However, Blur said that the financial status of the deejays is none of her business.

"At first, it was just a joke thing when I started to freestyle about a few of the dancehall entertainers who persons would say once had money and now appear to be broke. From the feedback, it is clear that persons within the industry find the song interesting and think that I have talent," she said.

When contacted, Stacious said, "Everything about that girl is irrelevant, and I have no further comments."

Mr Lexx said that while she has talent, the production needs work and "she could have delivered the song better".

"I think she also came off as offensive instead of funny, and that, again, is another error. Had the artiste gone for funny, it would garner a better response. But she is young; let's give her time to grow and learn. Nice try, hon," he said.