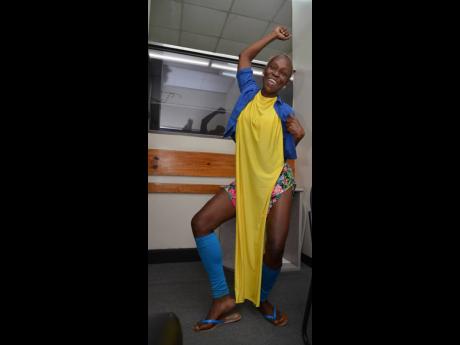 Majesty Gardens resident and 'fashionista' Fredericka Campbell said she is asking dancehall artiste D'Angel to desist from copying her fashion styles and give her the credit that she deserves.

The 37-year-old, who goes by the name Fredericka Styles, said one of the things that stands out the most is a current hairstyle that D'Angel flaunts, that she believes the artiste shamelessly copied from her.

"I was out by Three Miles and when I buy a STAR, I see D'Angel in the 'cute wand', the hairstyle that I used to wear that get down to my knees," she said.

Styles said she is an important figure in her community, popularly known as 'Back To' and was first highlighted in THE STAR in 2016. Then, she claimed that her telepathic ability, which allows her to connect to an uncommon supernatural being, has been protecting her fellow community members.

THE STAR asked Styles how D'Angel would spot her styles since she does not own a social media profile. She said people see her on the street all the time.

"Is from 2013 I am wearing the 'cute wand' hair style. Is because of me why every girl know say dem cute. No girl never know that long time and them keep on a copy my style and nah give me credit," she said. "Mi originate this style because when mi used to wear mi natty, people use to think say me mad, and as mi come with mi own ting now, D'Angel take it up and a act like is hers."

She then paused the interview to show off her eccentric fashion, which, she says, is an eye-catcher wherever she goes.

"This is called fancy dancy and no one in Jamaica nuh have anything like this. Everything is new like New Testament. D'Angel is copying this also ... she is saying 'cut and clear' and I am saying 'cut and wear', and everyone a cut and wear now," she said.

The mother of seven said she is only coming out because her children should be benefiting from her fashion designing talent.

"The world need to know what's going on. A my time now ... a me make every girl know how to make dem clothes can talk," she said.

When contacted by THE STAR for a comment, D'Angel said she had no comment on Campbell's accusations.