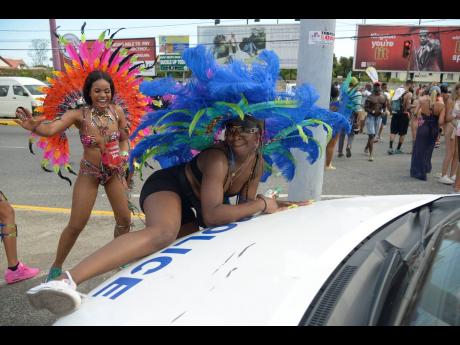 Shanyah fetes on a police patrol car along the Xodus Jamaica Carnival route on Sunday. 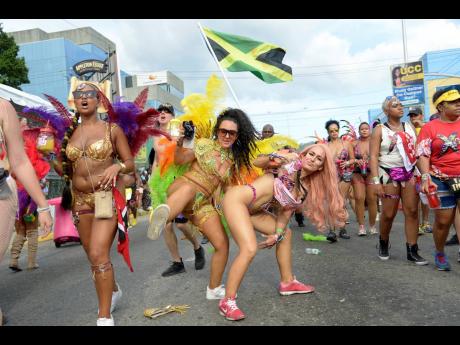 Revellers ‘getting on bad’ along the Xodus carnival route in Kingston.
1
2

Carnival season has come to an end, and from the many fetes to the massive, colourful road marches, the spectacle seems to get bigger each year.

With three major bands – Xodus, Xaymaca, and Bacchanal – filled with an estimated 9,000 scantily clad revellers and approximately 40,000 spectators, we can safely say that carnival is not only big business, it’s a staple on the Jamaican entertainment calendar.

While fans of carnival show up each year to line the streets and watch the parade of colours cascade along the streets of Kingston, there are critics who still believe that carnival gets way to much leverage and mainstream approval, especially when compared to dancehall.

One major difference between carnival and dancehall events is the sponsorship dollars that seem to be invested. At a glance, it seems like corporate sponsors are clamouring to attach their brands to carnival fêtes, while shying away from their dancehall counterparts. One could say that some sponsors feel safer investing in and working with carnival promoters. Or is it that the decision makers in these corporate companies just prefer carnival events?

One thing is for sure, there seems to be much more CEOs revelling on the streets in carnival season.

When you take a quick glance at the participants of carival each year, it appears to be mostly supported by the elites – Jamaica’s wealthy and powerful, and therefore, these events do not face as many challenges as their dancehall counterparts. For example, it would seem that dancehall events are not allowed to happen without the interference of the police, while carnival events are protected by the police. One can argue that carnival promoters ensure that they have all their permits in order and that’s how they avoid police interference.

There is a photo posted on The Gleaner’s Instagram page of Sean Paul’s wife, Jodi, very pregnant, dressed in her carnival costume and another one of an older woman, Norma-Lee Harriott, posted on The STAR Instagram page, also in her costume – she looked over 70 years old. They caused quite a stir because there are many Jamaicans who believe that both women should have stayed home. Many of the persons who commented felt that carnival was no place for either woman and that if they were at a dancehall event, then the post would not have been allowed, let alone accepted.

There were some comments in support of both women, and personally I think that neither being pregnant or old is a disability, and each of these women has a right to decide how they want to live their lives.

Even if a disabled woman wants to participate in carnival, that’s her prerogative and none of us gets to tell her that she cannot. While I believe that there is some relevance to the discussion about how carnival and dancehall events are treated, I do not think that any adult should be ashamed for living their lives, and yes, that includes revelling at carnival.